Home | Blogs | No looking away here 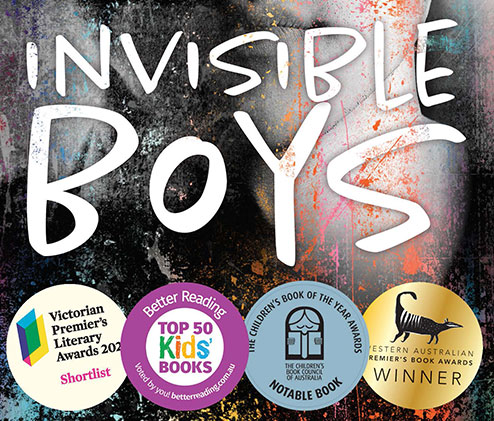 No looking away here

Considering it is about boys who aren’t ‘seen’ in society, visibility has not been the greatest of problems for the novel Invisible Boys, nor its author Holden Sheppard.

Among its awards was a 2018 City of Fremantle Hungerford Award for an unpublished manuscript before it fulfilled that promise with a 2019 Western Australian Premier’s Book Award for an emerging writer.

In more recent times, the book has been optioned for television adaptation.

Its author has a name straight out of classic fiction (that would be Holden Caulfield from Catcher in the Rye) or perfectly suited for a Geraldton born and bred, footy-loving bloke.

Except this Holden model is not the stereotypical one you’d expect from a country town. He’s out and proud, highly visible on social media and determined to make life easier for other young gay people struggling to articulate their sexual preferences in a tough environment.

Geraldton proves an ideal setting to bring to life the story of three Catholic high school boys working their way through their own identities and the societal forces that inevitably shape their ability to come to terms with who they are in their own way.

Charlie has those forces thrust upon him early in the story. He’s a rebel with dreams of being a punk rock star. He knows his sexuality and loves baiting his Catholic school teachers on the topic, but he’s not ‘out’. Not until he organises a hook-up on a date site with a man who turns out to be married with kids and whose wife ends up coming home at an inopportune moment.

This is where ‘Gero’ comes into its own; it’s not a metropolis but a big-small country town where everyone can learn anyone else’s business in an hour or two. Throw in social media and it could be a few minutes. Suddenly the whole school is onto it and not only is Charlie gay, he’s a gay home-wrecker.

Worse for him, his beloved dad has died and his no-hoper mum is shacked up with a no-hoper bloke. No fallback there.

Zeke would appear to have much greater stability in his highly traditional Italian family. With his charismatic older brother Robbie soon to be married, his parents are focused on ensuring the traditional ways are respected with his non-Italian bride-to-be.

It’s not exactly the time for the highly intelligent likely school dux to start to come to terms with feelings he has never explored for members of the same sex.

Kade Hammersmith, or Hammer to everyone in town, is another proposition entirely. He’s the classic school jock, the one most likely to be drafted to a WAFL team and the son of a footy star. He’s also experiencing some same-sex feelings he can’t seem to get away from. He’s pretty sure it’s just a phase but the phase is presenting him with some pretty compelling reasons to give it a go.

When Charlie gets involved in a secret relationship with a sporty young Northampton farmer, the three school mates are on an unlikely collision course with one another. Sheppard skilfully brings this engaging, challenging narrative together through a series of first-person narratives told from the point of view of each protagonist.

It’s a confronting story, particularly if you’re not ready for vivid descriptions of gay sex. But the aim is always to engage with the world these young people are negotiating, not just as gay males but as otherwise normal teenagers.

In that sense, it really should be confronting for older readers to take this peek into a foreign land that’s happening around them but that they are excluded from.

You don’t have to think gay sex is ‘normal’ to think there is something very abnormal about the unacceptably high rate of mental health issues being faced by young people, and certainly young people with other sexual orientations.

About one in five youth are experiencing mental health problems in any given year, according to What Young People Want from Mental Health Services.

That number does not account for the many young people who experience ongoing distress that doesn’t meet the threshold for a diagnosis. So, it’s clear what should really be confronting for the medical profession and the adult population with the moral responsibility to guide the next generation.

What Young People Want from Mental Health Services is based on interviews with nearly 400 young people, providing the opportunity for youth mental health issues and services to be appraised through the eyes of young people themselves.

Author Kerry Gibson is an associate professor in the School of Psychology at the University of Auckland and a clinical psychologist with extensive experience working with young people.

Invisible Boys succeeds in taking us into a place where deteriorating mental health and potentially suicide come to look like realistic propositions.

For clinicians, comprehending those conditions might help them in their practice, everywhere from a GP’s office to a public hospital ward to a psychologist’s couch. These boys deserve to be seen.