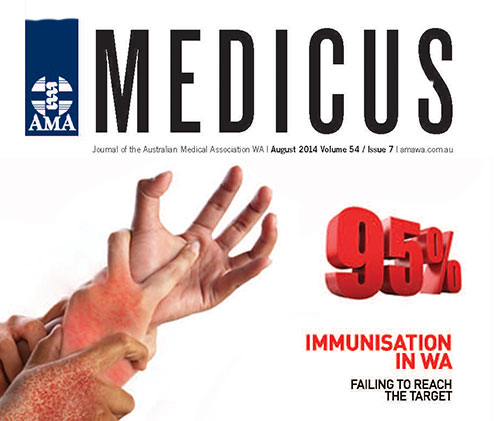 Don’t we live in the ‘lucky country’!

I have never seen a patient with epiglottitis. Neither have I had one present to my practice with rubella. Likewise there are many of my colleagues who have only read of these potentially life-threatening conditions within the pages of medical textbooks or journals, or learned of them through more senior colleagues.

These diseases along with other serious medical conditions such as polio, tetanus, diphtheria and pertussis have been suppressed in our community through one thing only – immunisation.

Yet preventative medicine can be a hard sell. People have lost their fear of diseases they don’t see anymore. Many people are unable to recall a time when measles and chicken pox were rampant, when millions died from tuberculosis, when lives were struck down by polio. Ironically, they remain happily content under the dome of security afforded to them by immunisation– even as they neglect to follow through with vaccination or indeed, object to it.

Immunisation was one of the primary areas of focus during my Presidency of the AMA (WA). I was thankful that WA Minister for Health Dr Kim Hames understood the concerns of the AMA and during my term as President, the Association collaborated with the Department of Health to help lift immunisation rates in the State. The WA Immunisation Strategy Implementation Steering Committee, of which I was a part in my capacity as President, worked hard and has made some progress. Yet the road ahead is long and winding.

WA’s vaccination rates are deplorable. The most recent statistics from the Australian Childhood Immunisation Register demonstrate that WA still has a long way to go before it can reach that elusive rate of 95 per cent, which is necessary to generate ‘herd immunity’. Our State remains below the national percentage rates in all three categories – children aged 12-15 months, 24-27 months; and 60-63 months. In fact, in the last two categories, WA is the worst performing state at 91.5 per cent and 90.3 per cent respectively.

As a GP, I feel disappointed. I feel accountable. And following the Federal Government’s announcement about its proposed GP Co-Payment policy, I now feel a mixture of anger and frustration.

Without doubt, the health benefits of vaccination are huge. So too are the economic benefits. If we could vaccinate everyone in this State, we would save hundreds of millions of dollars in lost time. And yet the Federal Government is pushing its $7 line.

There has been, and will be, plenty of debate about the Co-payment – who gets what, why and how; will access to care be affected; and who will protect the vulnerable in the community.

Allow me though, to interject – if the government does not quarantine immunisation services from the proposed Co-payment, it will run the risk of negatively impacting vaccination rates. That’s a risk we cannot take – anything that threatens the already fragile state of immunisation in this country is a retrograde move.

Around the country, vaccinations are predominately bulk billed as there is almost universal acceptance of our need to improve immunisation rates. It’s unfortunate enough that the community, in its quest to stay healthy, has to take on the Anti-Vaccination brigade as well as the lazy, time-poor, careless parent; now there’s the added impediment of cost!

My medical colleagues will agree with me when I say that immunisation must be excluded from any GP Co-Payment. It is fundamental to the health of our community going forward.

I will take it a step further. Vaccinations should be quarantined across the board, and for all age groups. Influenza and travel vaccinations must also not come under its radar.

As a famed epidemiologist, Dr William Foege said, “Vaccines are the tugboats of preventive health.” Yet in this case, if immunisation is not isolated from the proposed Co-payment policy, long-term outreach efforts to boost flagging vaccination rates in this country will lose major momentum.

Dr Richard Choong is a general practitioner and a former AMA (WA) President.