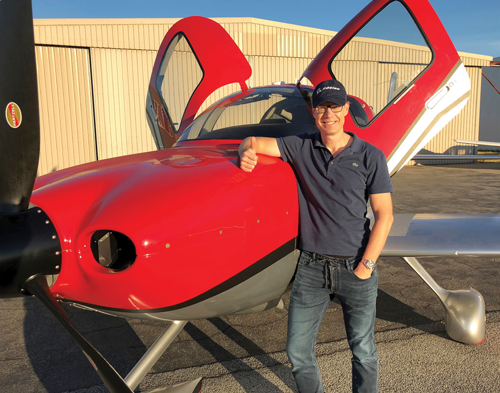 Best seat in the house!

Dr Franc Henze on the freedom, the views and the feeling when flying his trusty Cirrus amidst the clouds. Janine Martin reports…

On terra firma, within the clinical confines of the operating theatre, Dr Franc Henze proudly pursues his professional calling as an Oral and Maxillofacial surgeon.

But it’s in the endless amphitheatre of the sky where he happily indulges another more personal calling.

“I’ve always known I wanted to fly, even before I thought about becoming a doctor,” Franc tells me during our phone interview, his infectious enthusiasm rocketing through the wires.

I learn it was a keen interest that soared during early childhood, when Franc lived on the Dutch Caribbean island of Curaçao with his family.

“My father, an oil and gas engineer, worked there, and I spent the first eight years of my life flying everywhere, as we explored the nearby islands and returned frequently to visit my grandmother in Europe.”

Franc first took over the controls solo some 30 years ago, learning to glide in The Netherlands and then, Germany. But it was here at Jandakot Airport that he landed his long-held dream – a fixed wing pilot licence.

The technicalities of flying have always appealed, he says, and the freedom of being up in the clouds has him returning to the airstrip twice a week. He admits convenience is a major factor too – besides his thriving private practice in Perth, Franc also sees patients in Karratha, Geraldton and Albany.

“What I love most is that freedom to be in the air, to reach your destination faster, and to be safer than on the roads below.”

The spectacular views, of course, provide a major incentive.

“To see the earth from up above, to see the clouds, and to see the sun rise before anyone else never gets boring!”

His favourite part of the flight, he says, is “top of descent”.

“It’s that point where you lower the nose of the plane, reduce the power, and approach the airport to land. Up until then, you’re usually in autopilot mode. But at top of descent, I slide forward, the seat goes back in the upright position, and I concentrate. I make my radio calls and ask for permission from air traffic control. It is a fantastically cool moment!”

It’s easy to pick that, had Franc not studied medicine, flying planes would have definitely been on his radar. He confirms he would have become a commercial airline pilot, although he now holds a commercial pilot licence and a command instrument rating.

Franc owns a Cirrus SR22 GTS G6, which he says has served him well over the past five years.

“The SR22 is a very reliable, safe and fast aircraft. She requires little regular maintenance and has the inbuilt parachute system, which adds an extra level of safety. On average, what would take me 4.5 hours by car, only takes 60 minutes in my Cirrus.”

I ask him about his dream aircraft, the one he’d love to fly.

“I’ve flown both the Boeing 747-400 and the Airbus A380 on real motion flight simulators but for me, the dream would be the Cirrus Visionjet.”

Franc has flown the Cirrus Visionjet in Singapore in 2019, and was impressed by its spacious cabin and ease to fly, due to the similarities in avionics and flight characteristics.

“This jet would be the perfect platform for my missions within WA. Unfortunately, at this stage, there is no maintenance facility here because the aircraft is still fairly new. However, that will change with time.”

Although Franc’s Cirrus has become his trusty “work steed”, he also flies purely for fun, preferring helicopters for local sorties, as they are more “hands-on”.

“If I were to compare the two, I’d say planes are like driving a sports car; helicopters are like riding a motorcycle.”

Franc has also trained as a scuba diving instructor in the event that someday, his daughters might want to learn. That’s a few years away, given Summer is three and Phoebe is just nine months old – but full points for forward thinking!

Another “out-of-the-blue” decision (as Franc describes his various special interests) was undertaking a professional dog grooming course to care for the family pet spoodle, Daisy.

“Getting groomed has been a traumatising experience for Daisy. So, I ended up doing the course myself. Now, I have a proper dog grooming station set up at home, and I groom her approximately every six weeks.”

Is there anything Franc can’t do, I wonder. I settle on asking him if there’s anything he doesn’t want to do.

His response is instant: “I don’t want to work until 10pm every night!”

“I work regular hours on purpose, otherwise I wouldn’t get to spend time with my family. On occasion, the only night I don’t get to read my eldest
daughter a bedtime story, is when I’m flying back to Jandakot and land late. But mostly, I even manage to squeeze that in.”

In a sector like health, where many struggle to find that elusive work-life balance, it’s refreshing to come across someone who is managing to make it work.

With Franc’s wife also a doctor – Meg Henze is an endocrinologist who cares for both metro and regional patients – the Henzes seem to have found a happy medium; a flight plan that works for their young, beautiful family. And in the cockpit, Franc can’t stop smiling!