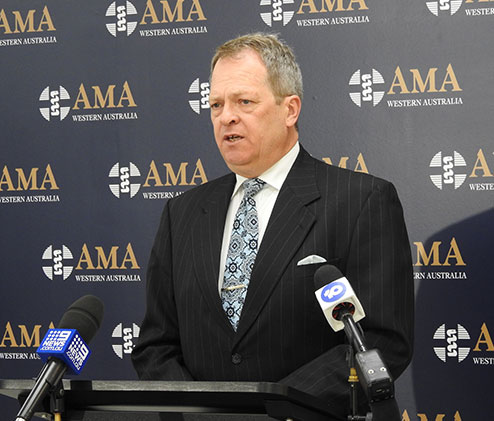 After years of negotiation and the matter being taken to the WA Industrial Relations Commission (WAIRC), two female doctors at the Sexual Assault Resource Centre (SARC) at King Edward Memorial Hospital have finally established their right to be paid at a rate commensurate with their expertise.

Despite providing highly specialised care for almost exclusively female sexual assault victims, a 2018 decision by North Metropolitan Health Service (NMHS), prompted by a circular put out by the McGowan Government, initiated the process to downgrade the pay for these dedicated doctors, Dr Debbie Smith and Dr Kim Farrington.

The AMA (WA) workplace relations team has liaised directly with the NMHS Executive, the Health Minister and the Director General of WA Health for the past three years for these members to receive the appropriate specialist rate, culminating in a three-day hearing at the WAIRC in June.

The AMA (WA) considers the estimated $100,000 cost of prosecuting the case was a waste of time, money and effort, and damaging to the morale of these doctors and the service. Health bureaucrats were in a position to resolve the issue under delegated authority, but failed to do so, or were advised not to do so, despite only a small cohort of doctors being employed by SARC.

Commissioner Emmanuel of the WAIRC handed down her decision on the matter last month, upholding the AMA (WA)’s claim that the NMHS could not renege on a promise to pay the practitioners at the appropriate rate, having sought to unilaterally vary their contracts by five levels.

Commissioner Emmanuel was scathing in her remarks about the NMHS:

“In my view, the Health Service has dealt poorly and unfairly with the issue of whether SARC doctors ought to be paid in accordance with the SARC pay scale.”

“The very poor treatment of [the Doctors] is more than simply regrettable. It falls well short of the standard of management reasonably expected of the Health Service.”

Dr Smith and Dr Farrington have each practised medicine for more than 25 years and served 18 years or more at SARC.

“Tenacity is a key feature of the kind of work these doctors do but this dispute has drawn unfairly and unreasonably on their qualities as committed, principled practitioners,” he said.

“Congratulations to them and the AMA (WA) on this win; this kind of member advocacy is precisely what the association stands for.”

SARC is a free and confidential 24-hour emergency service in metropolitan Perth, providing medical care, a forensic examination and counselling support to people who have been sexually assaulted within the previous 14 days.

SARC also provides counselling to people who have experienced sexual assault and sexual abuse in the past.

Dr Duncan-Smith lamented the protracted disputation with WA Health, particularly in light of the kind of work these women perform.

“Sexual assault has been brought squarely into the public domain with the crisis that continues to engulf the mining industry,” he said.

“Yet here we are having to spend years of our time and resources arguing with the Government over appropriate pay for the very people at the forefront of addressing the issue.

“What sort of example does this set about the treatment of women, in particular, when they have to fight tooth and nail simply to be recognised for their specialist skills?

“You start to realise the scale of the issues women face in the workplace after a case like this.”

The AMA (WA) President said it was clear that the Government understands how important SARC’s work is.

“The Government proudly announced $800,000 in funding over four years to SARC in June 2018,” Dr Duncan-Smith said.

Its media statement at the time noted that:

“Being able to provide increased specialist care and support to people who have experienced sexual abuse was a McGowan Government election commitment, aimed at helping some of the most vulnerable people in our community.”

Minister for Women’s Interests the Hon Simone McGurk said in the statement:

“We know that nationally, over a million Australians have experienced sexual assault in their lifetime, which translates to around one in six women.

“Services like this are vital in supporting people who’ve experienced sexual assault.”

“But it only makes me wonder why the Government would choose to engage in a protracted dispute that clearly did not need to occur,” he said.

“The next steps for the AMA (WA) in this matter are to ensure that Dr Smith and Dr Farrington have their current contracts revised to align with the SARC pay scale and to ensure backpay is received.

“The AMA (WA) will also now prepare to hold further discussions with both NMHS and the other doctors who may possibly be impacted by the SARC pay scale.

“We hope that the Government will accept that this decision equally applies to others for similar reasons.”