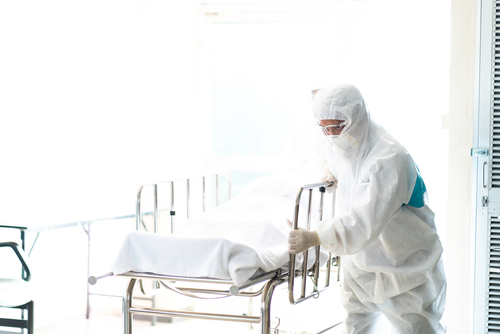 Addressing the media today, Dr Duncan-Smith said extending the mask mandate at this point would protect the medical system by reducing the number of patients in hospital.

“COVID hospitalisations unfortunately have jumped by 50 per cent since the start of the month and have now reached a record peak of 329 cases. This is a clear message to the people of Western Australia and the Government that the COVID pandemic is not over.

If we pass 350 hospitalisations, I’m calling on the Government to reintroduce a mask mandate that would include indoor spaces where social distancing cannot be maintained. This is in addition to the current mandate for hospitals, doctors’ offices, aged care, and public transport.

Public health measures take two to three weeks to have an effect on the number of people in hospital. That’s why when we break 350, we need to be doing something different to what we’re doing today to protect the medical system down the road. The medical professionals in the hospitals who have been the backbone of our COVID response are tired and they’re worn out. The McGowan Government needs to protect them by reducing the number of in-patients in hospital, especially if we break that 350 mark.

The Chief Health Officer has already predicted that we’re going to face a peak in four to six weeks. I certainly hope it’s not like the dire predictions of the McGowan Government previously, where we were going to hit 20,000 to 25,000 cases, which didn’t eventuate. Hopefully it will stay less than that 10,000 mark. But what’s important here is the number of hospitalised patients. Once we get into 350-plus, especially if we had over 400, that’s effectively taking out one of our tertiary hospitals.

We’ve already seen from the record 6,500 hours ramping in August last year and the cancellation of elective surgery in September, when we had no COVID, that even with four tertiary hospitals, we do not have the reserve to deal with business-as-usual medical care. If we effectively take out a tertiary hospital with 400 people-plus in hospital, the system is going to struggle terribly.

Adverse outcomes will occur related to COVID and non-COVID illnesses, so if someone has a car accident, a stroke, sepsis, outcomes will be compromised. We will also see even less ambulances on the road, as has already been seen in the eastern states. July is on track to break 7,000 hours of ramping – which would be the worst month in recorded history.

BA.4 and B.A5 are immune-evasive, and that’s why it’s so important that when people are due their COVID booster, they go get it.

We’re seeing flu presentations as well, so again, get your flu shot and take social measures to protect yourself from getting COVID and spreading it.”