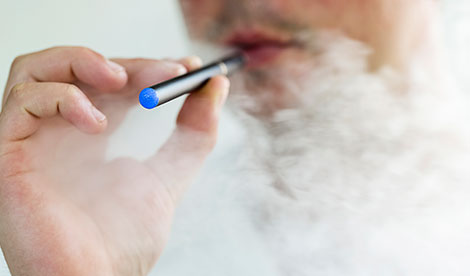 Australian laws and regulations controlling the use and sale of tobacco based products, including e-cigarettes are the envy of the world, Dr Khorshid said.

The vast majority of Australian government and non-government health organisations have taken a strong precautionary position on electronic cigarettes and have consistently warned state and federal politicians about being conned by those who seek to weaken current restrictions.

“It is crucial to recognise the importance of Australia’s statutory health authorities and of rigorous, independent research in evaluating the evidence on novel products like e-cigarettes, which could pose a serious risk to public health,” Dr Khorshid said.

“We must not take our eyes off the ball. Those who support vaping are very well funded, determined and willing to say and do anything to fulfil their aims, and pull down the rules currently restricting e-cigarettes.”

Dr Khorshid told the Federal parliamentarians that they must retain a strong opposition to any individual or group fighting to remove restrictions.

“You have been elected by the people of WA to fight for health, not to give in to well-funded lobbyists who so desperately want to see the re-introduction of tobacco-based products,” Dr Khorshid said.

“The covert techniques of tobacco companies to influence public policy, such as lobbying and funding Australian political parties, often via third party organisations, must be exposed and regulated,” Dr Khorshid said.

Dr Khorshid also argued that there is evidence of a gateway effect for young people to tobacco smoking and tobacco companies are determined to create another “epidemic” of youth e-cigarette use and a new generation of nicotine addicts.