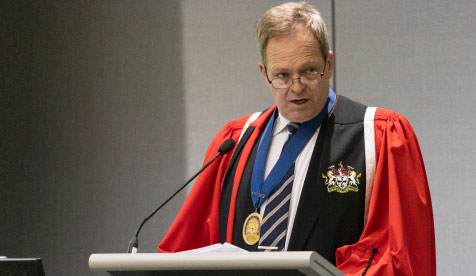 An AMA (WA) Vice-President since 2016, Dr Duncan-Smith was elected unopposed at the annual general meeting held at the conclusion of the first day of MEDCON21, the AMA (WA)’s three-day medical conference at Perth Convention and Exhibition Centre.

Dr Duncan-Smith said he felt proud and privileged to assume leadership of the Association at such a critical juncture for WA’s health system and public health in general.

A University of Western Australia graduate, Dr Duncan-Smith is a consultant plastic surgeon and burns surgeon, who played a crucial role in the Bali Bombing Disaster of 2002 as one of the two treating Consultant Burn Surgeons. He has experienced first-hand what can be achieved with a medical workforce working in unison with medical administration towards a common goal, with the excellent health outcomes for survivors of both the Bali Bombing and Ashmore Reef disasters.

He is a humanitarian doctor, undertaking 15 overseas volunteer surgical aide trips in his career, including Mongolia, Indonesia and Vanuatu.

The new AMA (WA) President said he looked forward to working on real solutions to address the many challenges evident in the health system.

“The AMA (WA) does not shy away from its responsibility to pursue the highest standard of health for the WA public and provide frank and fearless advice as we see fit,” Dr Duncan-Smith said.

“We appreciate the need to have open channels to ventilate our differences and find solutions where they are available.

“However, there is simply no avoiding the crisis in the public hospital system evident in chronic ambulance ramping and the lack of hospital beds.

“I look forward to articulating my own vision, the policies of the AMA (WA) and taking practical solutions to these issues to the Government and the public.”

“Dr Miller resumed his term in 2019, but no one could have foreseen what befell global health in 2020 with the onset of the pandemic,” he said.

“Dr Miller never shirked the workload or his leadership role as an informed, authoritative voice serving the interests of the medical profession and the wider public.

“His advocacy on COVID-19 has made him a widely sought-after commentator in local media and throughout the nation.

“During his term he helped steer State legislation and the implementation of Voluntary Assisted Dying to an outcome on 1 July this year that is safer, fairer and more workable than the original proposal.

“Dr Miller’s exceptional skills and passion will not be lost to the AMA (WA), as he remains on our Board as Immediate Past President and will have a role in our media team going forward,” Dr Duncan-Smith said.

ABOUT THE AMA (WA)