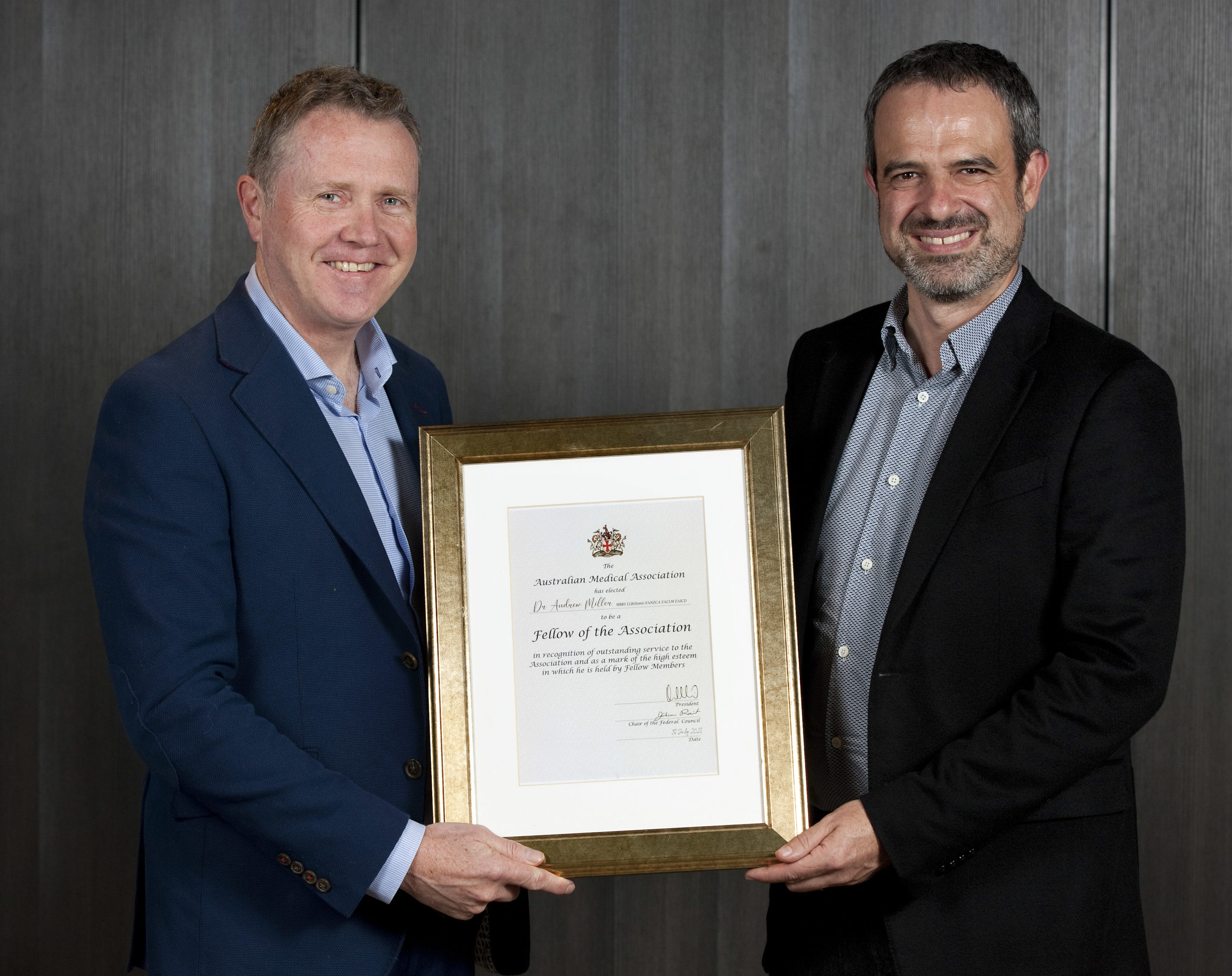 Congratulations to our Immediate Past President, Dr Andrew Miller, who, on Saturday, was recognised for contributions he has made, and continues to make, to AMA advocacy and raising the profile of the Association here in WA and nationally.

An ardent advocate for medical practitioners from all specialities in both the public and private sectors, He was acknowledged for his extraordinary contributions to the voluntary assisted dying debate and the management of the pandemic in WA, as well his work with formulating AMA policy on many complex issues.

The Australian Medical Association’s (AMA) highest award, the Gold Medal, has this year been awarded to Laureate Professor Nick Talley in recognition of his outstanding services to medicine, including publishing the Medical Journal of Australia.

Professor Talley’s award was made at the Annual National Conference of the AMA.  There were also six admissions to the AMA Roll of Fellows.

AMA President Dr Omar Khorshid said the Gold Award was presented for exceptional service, which was recognised by the winner’s medical peers in recognition of his or her advancement of the practice of medicine.

Professor Talley is the Pro Vice-Chancellor, Global Research, at the University of Newcastle. He is considered to be one of the world’s leading gastroenterologists and an outstanding clinician and educator.

Dr Khorshid said Professor Talley’s outstanding contribution to medicine included oversight of the AMA’s Medical Journal of Australia (MJA), as Editor-in-Chief, which had adapted to the urgency of the COVID-19 pandemic by reorienting the peer review process and adopting pre-press publication to ensure emerging evidence of COVID-19 was presented in a timely way.

Under Professor Talley’s leadership, the MJA had achieved a very high impact factor with the number of citations of articles published to make it one of the top 17 medical journals globally.

Dr Khorshid said: “As a result of Professor Talley’s leadership and drive, the latest vital information about the novel and emerging COVID-19 pandemic was presented in a scientifically rigorous way to inform clinicians so we could take up the fight on the frontline armed with the latest insights.”

The Roll of Fellows recognises outstanding contributions to the profession of medicine from AMA members. Six AMA colleagues have been admitted as AMA Fellows following consideration by the AMA Federal Council.