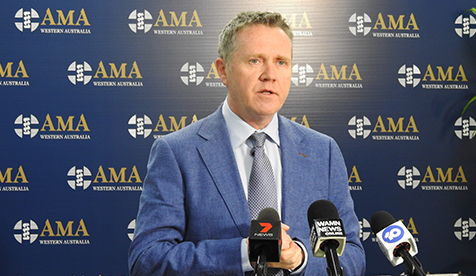 Failure to provide senior doctors job security and doctors in training the right to park and retain their leave entitlements while they move through the health system are the primary reasons the Australian Medical Association  (WA) has rejected WA Health’s offer to replace the 2016 Industrial Agreement*.

Western Australia has five-year employment contracts, although many senior doctors are still subjected to regular six-month contracts. The lack of automatic contract renewal means senior doctors are in an unenviable position, where raising concerns about the safety of patients or healthcare workers can lead to losing their jobs.

“WA Health cannot provide a compelling reason as to why senior practitioners should not be afforded job security because there is none. Particularly when all other public sector employees with more than two years’ continuous service have been granted the right to convert from casual and/or fixed term to permanent employment,” Dr Miller said.

Dr Miller pointed out this job insecurity was having an impact on patient safety, workforce morale and doctor wellbeing – and that accepting WA Health’s offer would compromise the safe function of the WA health system.

“The AMA (WA) also cannot accept an offer from WA Health which is contingent upon a reduction in rights for doctors in training, where prior accrued entitlements are not recognised upon appointment to senior practitioner classifications with the same employer. This doesn’t happen in any other industry or anywhere else in healthcare,” Dr Miller said.

WA Health is also refusing to recognise the training of specialist General Practitioners for the purpose of the agreement and treats them as second-class citizens, a hangover from the distant past. This has a significant impact on rural health services and is reminiscent of the poor treatment of specialists at the Sexual Assault Resource Centre.

“These may seem like small issues to bureaucrats, but they are not for the patients who need these doctors in their darkest hours,” Dr Miller said.

While always open to further negotiation if the Government can actually offer something substantial, Dr Miller expressed his disappointment that an agreement could not be reached during a time when COVID-19 has changed our world, and doctors along with other healthcare colleagues will bear the brunt of a second wave while attempting to keep Western Australians safe.

“Current workplace shortages and consequent overwork and stress will not improve while the Government takes this outdated combative approach,” Dr Miller said.