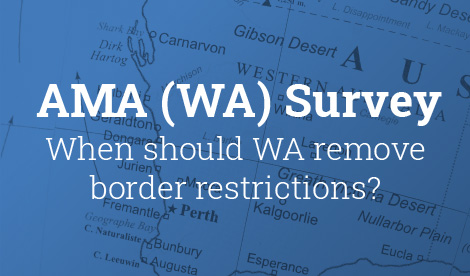 A survey of WA doctors by the AMA (WA) has shown an even split between those who are opposed to the McGowan Government decision to halt the planned border reopening on 5 February, and those who agree with the decision.

Almost 1,500 AMA (WA) members who responded to the survey are separated by only a handful of votes, with those who think WA should have opened up on 5 February in a slight majority.

However, most respondents thought the AMA (WA) should now accept the decision, and not lobby the State Government to reinstate 5 February as the date on which all border restrictions are lifted, with the split about 60-40.

Just over half of respondents believe the Government should set a target date in the near future, based on validated modelling, and not coinciding with the winter peak.

About 35 per cent were adamant WA should open as previously planned on 5 February, while just over 13 per cent believe WA should remain closed until 90 per cent of the eligible population is triple vaccinated.

The most definitive response was regarding the health system, with 78 per cent believing WA was not ready to deal with the inevitable Omicron outbreak if the State had opened on 5 February.

“After the Premier announced 5 February as the ‘opening date’, at no stage did I ask for a delay. When asked directly by media if we should delay, I always said it was an incredibly complex question that only the Government has all the information and modelling to answer.”

“My job was to present the information, evidence and picture painted to me by members who were out there preparing for the ‘opening day’, both city and country, primary care, public and private, adult and paediatric specialists.”

“The AMA (WA) survey was exclusively for doctors and could only be completed once. Further, it presented several options, and not just black and white questions that would also include people who did not agree with the concept of an open-ended delay.”

“I presented information to the Government that was consistent with the opinion of 78 per cent of respondents to the survey, that the WA heath system was not ready to deal with the inevitable Omicron outbreak if we had opened on 5 February. As AMA (WA) president, it was my job to do so, to motivate them to get ready.”

“So where do we go from here? Just over 50 per cent of respondents believe WA should set a target date in the near future, based on validated modelling and not coinciding with the winter peak. This supports the position I took within 24 hours of the Premier’s announcement.”

KEY RESULTS FROM THE AMA (WA) SURVEY ON BORDER RESTRICTIONS

*Percentages have been rounded 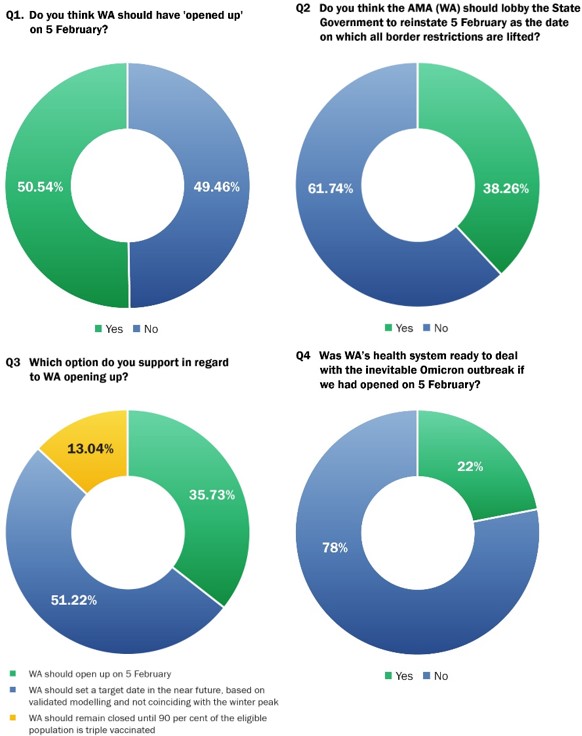