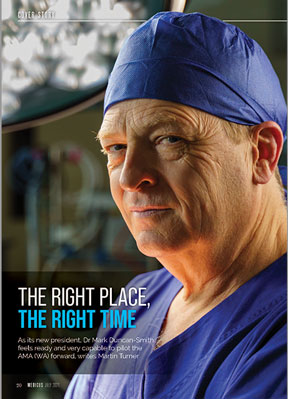 He may have ascended to the top position in WA’s peak medical body but as a young man, our new AMA (WA) President, Dr Mark Duncan- Smith, might well have found himself on a different flight path.

“When I was in the late stages of high school, I actually applied to Qantas to become a pilot but they knocked me back, saying I had to apply to the Air Force to learn to fly there first,” he said. The thought of exiting the Air Force at the ripe old age of 30, however, proved a deterrent for the young Attadale lad.

Even then, nothing in his background was pulling him towards medicine, having attended Attadale Primary School and then Scotch College. But another branch of healthcare was giving him some clues. “I got to the end of high school and did one of those personality aptitude tests, which suggested nursing might suit me,” Mark said.

“It was the first inkling that I had any sort of nurturing personality type at all.” With the end of high school bringing no further clarity on career choices, Mark decided to place medicine at the top of his list.