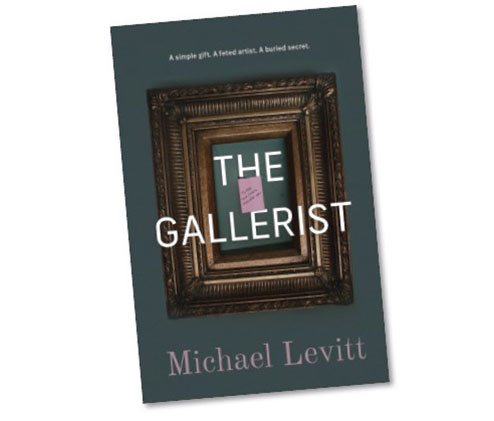 Surgeon’s first novel from the art

When you’re a leading colorectal surgeon with three non-fiction books about the workings of the bowels, there’s probably the temptation to make your first foray into fiction a story about a serial killer leaving a trail of mayhem in toilets around the metropolis.

Dr Michael Levitt eschewed his day job for another obsession: the world of art. Not that it is totally removed from his workplace, as colleagues at the office in his role as Chief Medical Officer (CMO) would attest.

He doesn’t see his novel The Gallerist as targeted directly at art lovers.

“I’m talking to people about the capacity of art to move the spirit,” Dr Levitt said.

“Since I’ve been here (at the CMO office), I’ve populated the walls with art from my collection. It just sits around and people look at it and absorb it or even don’t; it’s subliminal.

“Even so, it’s amazing how impactful art can be in that environment and how many people will unexpectedly come up and say ‘I really like that one’ and it would be one that I wouldn’t imagine that many people would like, or some might be what you would call a tough painting that they really like.

“So I’m convinced that I’m talking to people about, in some respects, the way art moves me; that’s really kind of an important theme.”

Art moves fast in the plot of The Gallerist. In the opening pages, Perth gallerist Mark Lewis has a visit from “a local Mount Lawley identity he had often seen along Beaufort Street” carrying a painting she wants him to sell.

It’s simply called Charlie’s Painting and was apparently the work of a young man of the same name, who, like the woman’s sister and possible girlfriend of the teenage artist, had cerebral palsy and attended the Sir James Mitchell School for the disabled.

What disturbs and intrigues Mark more than anything is that it looks very much like the work of renowned Victorian abstract artist and 2020 Australian of the Year nominee James Devlin.

Is it a forgery? How did it end up in Perth under these circumstances if it is a Devlin, given its 1972 provenance is years before the latter’s work took the art world by storm?

“Mark’s world had disintegrated after Sharon’s death. The self-belief and nerve that were so crucial for any surgeon to embark upon all but the most minor of operations had deserted him and he had lost any sense of the ‘thrill of battle’ that he had previously found invigorating. Each new patient became a source of anxiety and he knew that he risked making the wrong decisions about when to operate or even which operation to recommend.”

While the protagonist gave up on surgery after his wife’s death, he applies a certain surgical precision to his sleuthing in pursuit of the truth, which leads to romance and inevitably crossing paths with the formidable and dangerous Devlin.

Likewise, Dr Levitt appears to give a laser focus to the novel’s seemingly meticulous plotting, an impression that is slightly deceptive and comes from a first-time novelist finding his way through his narrative process.

“It kind of evolved and developed as I went along,” he said of the plotting.

For me, writing it without knowing exactly how it would end was an important part of making sure that it would be less predictable.

“Next time I definitely think I’d have the end game in sight earlier on and feel more comfortable about writing it.”

If the end game was writing an intriguing, suspenseful page-turner with a highly recognisable setting to a Western Australian audience, the surgeon-novelist need not fear. Dr Levitt is fast honing in on the art of fiction writing.