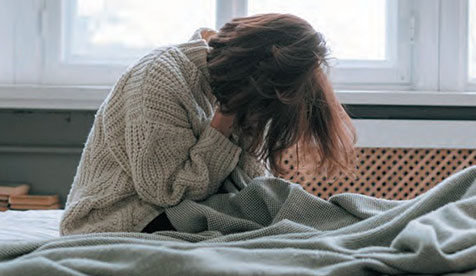 Sleep problems? Time to wake up

Discussing sleep issues is easy, particularly with hard-working people like medical practitioners. We all know how poor sleep affects our mood, our wellbeing and our productivity. We constantly battle to balance our need for sleep with time required for work, family and social pursuits. For lots of us, this balance is precarious and for some of us, serious mistakes have occurred when we have got the balance wrong.

Many in the community share these problems. Poor sleep is extremely common, with 40 per cent of adults complaining of unrefreshing sleep at least several days a week. The reasons for this can vary from insufficient duration, due to competing demands for time, to inappropriate timing, because of weight of COVID-19, the Parliament of Australia published a report (Bedtime Reading) following an inquiry into sleep health awareness in Australia that, among its issues such as shift work, to inadequate quality, because of untreated sleep disorders.

Poor sleep in all its forms has measurable effects on health, wellbeing, safety and productivity. There are economic costs associated with this which, given the pervasiveness of these problems, are huge. 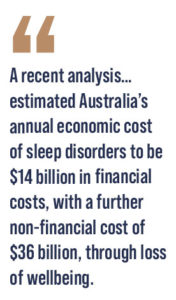 A recent analysis conducted by the health economics and social policy team at Deloitte Access Economics estimated Australia’s annual economic cost of sleep disorders to be $14 billion in financial costs, with a further non-financial cost of $36 billion, through loss of wellbeing. Of the financial costs, approximately $900 million per annum is spent on treating the disorders, with the balance attributable to the productivity losses and non-medical accident costs associated with not doing so. This long tail of expenses makes a case for increasing expenditure on detection and treatment to reduce them.

A similar analysis by the Deloitte Access Economics team of the costs of inadequate sleep from all causes, including from lifestyle choice as well as sleep disorders, demonstrated an annual cost that was approximately double that of sleep disorders alone. This reinforces the case that to address sleep disorders alone is to deal with only part of the problem and that a public education campaign to inform on sleep issues and preventive measures would be amply justified.

In 2019, before other health messaging drowned under the weight of COVID-19, the Parliament of Australia published a report (Bedtime Reading) following an inquiry into sleep health awareness in Australia that, among its 11 recommendations, suggested exactly this. The report’s first recommendation was that the Australian Government prioritise sleep health as a national priority and recognise its importance to health and wellbeing alongside fitness and nutrition. This report is part of a growing body of evidence suggesting the community’s attitude to sleep and its problems needs to change. These matters have been taken for granted for too long, with issues relating to poor sleep unrecognised, misdiagnosed or simply ignored.

For some, short sleep is worn as a perverse badge of honour – being seen as a testimony to their mental strength, rather than a wilful act that weakens it. Perhaps our collective tendency to take sleep for granted reflects a frustration with its time-consuming nature. Perhaps it is because we have done it all our lives and this familiarity has bred acceptance of whatever status quo we have arrived at. Some sleep problems evolve slowly, abetting this process of familiarity and acceptance.

Collectively, despite the growing evidence that more could be done, our indolence regarding sleep issues persists. An extraordinary recent example was a draft National Preventive Health Strategy published by the Federal Department of Health that mentions the word “sleep” only twice amongst its 45,000 words, while the other pillars of a healthy lifestyle – diet and exercise – receive elaborate attention, along with mental health, which is intimately related to sleep problems. This, despite the findings of the parliamentary report commissioned from the same source: the Department of Health.

Australia celebrates its visionaries – those that take new information on board and, as best possible, deal with it prospectively. Unfortunately, a lot of what passes for planning is not visionary but takes a lazier, ‘safer’, backwards-looking form, based on historical precedents. Where sleep problems are concerned, ignoring them is not as safe as planners might like to think. Given that they and the community are now armed with much health and economic information about sleep problems, failure to act will be judged harshly in the future if preventable problems are left to flourish unfettered. The national preventive health strategy planners risk being exposed as myopic, rather than visionary, in their deliberations if they fail to engage with these issues.

The Deloitte Access Economics analyses of sleep costs and the report from the Parliamentary Inquiry help formalise what every human understands by simply extrapolating from their own experience. You feel worse, are less safe and are less productive if you are sleep deprived.