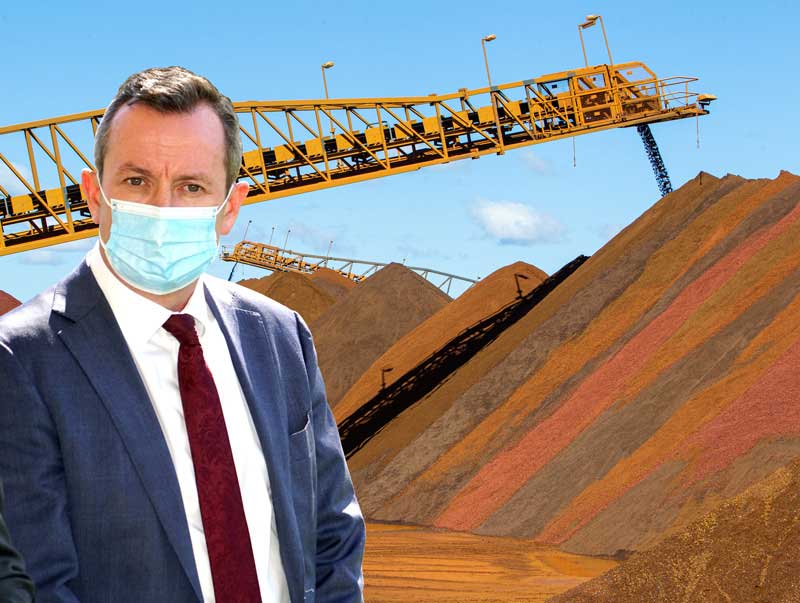 President’s Blog: The man in the iron ore mask

Life has had its share of ups and downs for Premier Mark McGowan in recent times. He has had COVID-19 and watched his child suffer from the disease. Here’s hoping his family is fully recovered from the virus. The AMA (WA) is all too aware of the seriousness of the illness and its potential for lasting effects.

Mr McGowan’s then come out of isolation to headline a historic Federal Election launch in Perth. It’s indicative of the importance placed on WA at this election by both sides that Federal Labor would decide to launch here.

It also shows the significance of the sheen of Mr McGowan’s electoral success after his eyewatering victory at the last State Election. Heck, Mr McGowan even somehow turned the patch of the AMA (WA) offices from Nedlands into Redlands.

The seat of Cottesloe down the road now sits exposed like leftover caviar and oysters on a tasting plate at an upmarket seaside bistro.

All the while, Mr McGowan has had something else on his mind: the State Budget being handed down on Thursday. To recap, last September, the AMA (WA) welcomed the increased capital expenditure in the 2021-22 State Budget, but was appalled by a reduction in operational budget over the next two years to less than 20/21, arguing it would see reduced service capability in a system which couldn’t (and can’t) keep up with business as usual.

Recognising the disquiet, and with an enhanced surplus to play with, a mid-year budget review allocated a further $1.28 billion into the health and mental health system. This week we’ve had far less of the hoopla around health spending, with a combined spend of about half a billion dollars going to infrastructure and fixing ramping, and a further $150 million to regional health among the items released so far.

We applauded the Government for recognising out-of-control and sustained ramping as unacceptable and a health crisis in WA, while expressing concern the suite of measures might give the appearance of a cure without making a material difference to the crisis. Nevertheless, we were encouraged by the announcement of a Ministerial Taskforce led by the Health Minister. It shows that the Government has taken responsibility for the problem of ramping, and we would welcome the opportunity to participate.

But I made it clear that capacity in our public hospitals remained a major problem that would continue to blight the performance of our health system. Although previously closed beds have started to be reopened by the McGowan Government, other states have also opened more, and we are likely to stay at or near the bottom of the list of beds per capita nationally with current plans.

Mr McGowan built his reputation and standing on rebalancing the books of the State. It was an iron ore-clad guarantee of fiscal discipline. On the back of mountains of mining revenue, he’s now turned the tables.

But over the course of his time as premier, the health budget fell significantly behind demand. With a purported $10 billion surplus to play with this time around, you can be sure the AMA (WA) will continue to call for increased investment that makes up for what’s been lost through chronic underspending.

And speaking of mountains and peaks…  We reached a new peak of 10,182 daily COVID-19 cases this week, an outcome of reduced restrictions while the pandemic is in the plateau phase. If you want to reduce your risk of getting COVID, then I call on you to voluntarily wear masks indoors.

The inexorable surge of politics goes on for Mr McGowan. He will scarcely be able to stop for a breath after he hands down another monster budget, even after the testing times he’s had of late. COVID-19 shows no signs of abating just yet and the role of public health in arresting its flow continues.