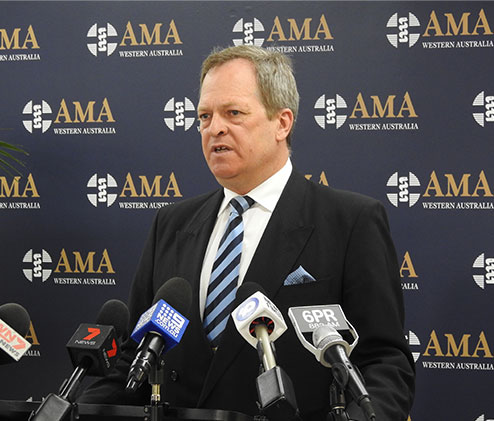 President’s Blog: Still time for the Premier to make health a winner

Given the long weekend we’ve just had, it may have seemed a bit churlish to invite the media along to the AMA (WA) offices this morning to tell them just how bad morale is among senior doctors in our public hospitals.

After all, surely the brilliant showcase provided with 61,000 people in a packed stadium for the AFL grand final and all the surrounding events here in Perth are a vindication of the way we’ve dealt with COVID-19 on this side of the continent?

Yes, kudos to the State Government and the health leadership for the measures that have kept community spread out while so many states are struggling with the impact of the Delta variant.

But we need to separate this whole-of-government approach to COVID-19 to the way our public health system is being managed in general.

As I told a packed media conference today, the greatest asset any business has is its people and unfortunately senior doctors at public hospitals are not feeling the love from the WA Health Department. I would say that some, probably a lot of them, are not even feeling liked, based on the results of our Morale and Engagement Survey.

With about one-third of all senior doctors in the system responding, we think it’s a good indication of just how they are feeling and corroborates the results of the Minister’s own recent Your Voice in Health survey.

Yet it was two metropolitan hospitals that had the worst figures overall for morale: Rockingham General Hospital and King Edward Memorial Hospital.

The orientation at King Eddies is almost entirely about cost– cutting and Rockingham has had major issues with disruption of local obstetric services and the devaluing of GP obstetricians.

We are concerned that this will not improve, based on the operational budget of WA Health being cut over the next two years by the McGowan Government in the recent State Budget.

But the core of the problem at a whole-of-system level, we believe, is five-year contracts. Essentially it is dangerous for a senior doctor to raise their head above the parapet wall for fear of having it shot.

We have cases where senior clinicians have raised issues about safety and quality and have subsequently not had their five-year contracts renewed.

This creates a toxic work environment for doctors, who are instinctively orientated towards safety and quality of healthcare delivery, but risk being decapitated if they raise those issues.

Proof of this is that the best morale and engagement is at Joondalup Health Campus and St John of God Midland Hospital, public-private partnerships which have the lowest number of doctors on five-year contracts.

Having said that, a good news story is that Royal Perth Hospital has also managed to achieve some good results on morale, indeed even better than SJG Midland. So, there are other factors that feed into morale and engagement and we will work collaboratively with the Government and the HSP boards to see what can be achieved.

But really, the biggest free kick that Mr McGowan and his Health Minister could give right now would be to simply provide doctors with permanent contracts in the public system. When I say free, it’s pretty close to the reality. The cost would be negligible and long-term it would actually save money by driving efficiency and innovation in an environment where doctors feel free to lend their clinical expertise to management without fear of reprisal.

The AMA (WA) doesn’t want to deliver endless bad news about the state of health and our concerns about the impact of a COVID-19 outbreak on such a constrained health system, being driven down further and further by a shrinking operational budget.

A premiership isn’t about one grand final, Premier. Give doctors security, get the books in order and make the health system a winner all year round.

Feel free to contact me with your views at president@amawa.com.au