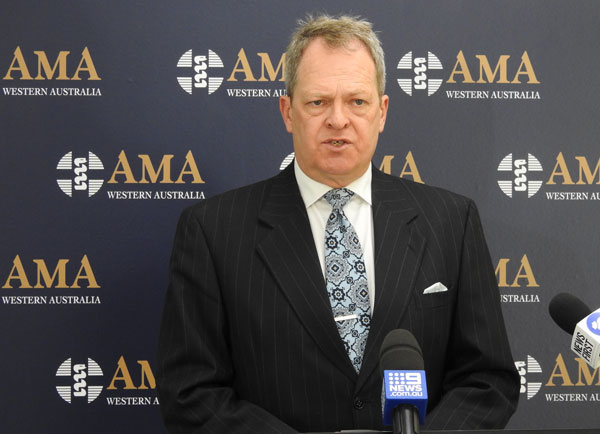 President’s Blog: Plenty to crow about on Manic Monday

Far be it for me to ‘Crow’ too much (a one-point nailbiter to the Dockers over Adelaide can do that to a long-suffering supporter, especially coming after the AFLW side bounced the Kangaroos in their qualifying final) but the AMA (WA) has had its fair share of wins this week.

I’ve been arguing for some time now that the plans to scale down private elective surgery from Monday this week, as indicated by the State Government, were unnecessary.

The previous week I made the case at a media conference in the strongest possible terms:

The AMA (WA) calls on the Government to give consideration to not interfering with private elective surgery unless it is absolutely necessary and imminent, in the event of apparent collapse of the public medical system. But as the numbers are low, as the hospitalisations are low, as the ICU is low, we don’t think this is going to be necessary, and we call on them to consider not interfering with private elective surgery at all.

We all know that elective surgery is necessary surgery, and people on waiting lists do get worse, do get an advancement of their diseases, and it does lead to increased emergency department presentations. If we don’t need to interfere with elective surgery, then we shouldn’t do it.

While the pause on non-urgent elective surgeries at public hospitals remains in place until 9 May, this measure at least gives a level of protection as we determine where the COVID-19 peak might sit.

But the continuation for the private system, where most elective surgery occurs, is a clear win for our doctors and their patients.

Monday was looking like a great day, but it only got better. Members would have known we’ve been spending a lot of our time and energy dealing with HBF, since being notified of its intention to change medical gap arrangements from 1 July, along with additional cuts in funding to a range of items.

We’d already created strong channels of dialogue, to ensure our concerns with the changes were registered loud and clear. As a result, HBF had already delayed by a month, till 30 April, the deadline for doctors notifying the insurer of their decision to accept its changes to medical gap arrangements. This gave us some valuable extra time for engagement and for HBF to reconsider the impact of its decision.

Then, on what was quickly developing into Magic Monday, HBF informed the AMA (WA) that their proposed changes were being withdrawn. As a result:

The AMA (WA) appreciates the efforts of the HBF Board, CEO and senior management in listening carefully to the AMA (WA) and private specialists’ concerns on the unintended consequences their changes would have had on patients, and the impact of the proposed changes on private healthcare in WA.

The AMA (WA) is committed to working with HBF on issues we identify together.

This isn’t a case of us against them. Many of our members are also, in addition to working in a commercial arrangement, members of HBF; our stance was made as much to protect the interests of the insurer as it was to protect ours. These are mutually beneficial arrangements, but the integrity of the medical profession is paramount.

As our Private Specialist Practice Group Chair Dr Michael Gannon put it so passionately and eloquently in the latest edition of Medicus, which set out many of our key concerns:

“I would remind the Board and Executive Management of HBF that we are your product. Best-practice specialist care of private patients in private hospitals is your value proposition.”

At most media conferences, I’ve been a bit of a scratched vinyl LP (the kids will know what I’m talking about, they’re buying the things again, for some reason) on the issue of the Government’s ‘top-secret’ and ‘redacted’ modelling of COVID-19 cases.

Look, it pains me to repeat myself, but sometimes it’s the only way, and sometimes it helps. Just like it did on (Miraculous) Monday, when we were informed that the Government is now providing a snapshot of the cases against the modelling, as well as releasing the vaccination status of hospitalisations. This will be updated twice weekly, and the link provided in WA Health’s daily statements.

We don’t have the full picture, and I’ve told reporters that in this case, as always, knowledge is power, and withholding key information helps the Government control the narrative. Nevertheless, the increased level of transparency is welcome, and shares the power just that little bit more. Tracking that peak is difficult enough; I’ve suggested we may be at some sort of plateau, but the case numbers are moving a little in recent days.

But yet again, the AMA (WA)’s advocacy has played a part in effecting important changes in health. You don’t get this level of influence without being a respected media voice, without continual, grinding meetings at the highest levels of the health hierarchy, often with seemingly no end in sight.

Then you get days like Monday, and a few things come together, and you realise just how powerful your collective voice can be in an organisation of this pedigree.

It’s only week two of the footy season (and the Dockers still need to get over St Kilda at Optus tomorrow, while the women have a week off before the prelim final; let’s keep the Eagles out of it for the moment) but let’s face it, racking up a win or three is far better than the alternative.

I’m taking it as a good sign. Stay tuned for a few more victories we can share with you over coming weeks. Our members are already on a winning team but there’s always room for more in the squad. Get on amawa.com.au and join us today.