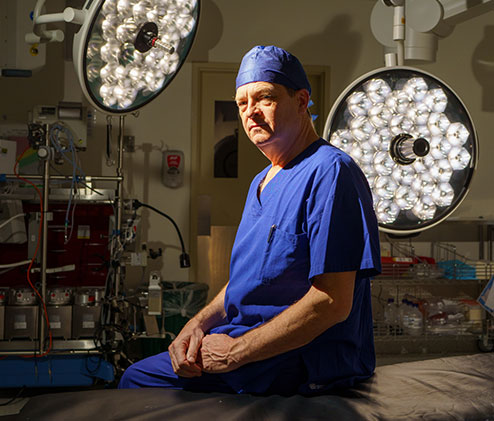 We’re more than a week into the full border reopening, and really, all things considered (and not to deliberately make an allusion to war), it’s all quiet on the western front regarding COVID-19.

Minimal numbers in ICU are not particularly comforting to the family of someone actually on a ventilator. A low number of deaths is little solace for a family grieving the loss of a parent, sibling, grandparent, aunt, uncle, whatever.

Nevertheless, the spread of the virus was always going to have some consequences, and the numbers inevitably play out to some extent. We can only be thankful the current trends are well below the lower end of the Government’s modelling, so that many more families have been spared undue stress than might otherwise have been the case.

It was loved ones I had in mind when I held a media conference on the day of the reopening.

The bringing down of the borders also recognises the importance of family reunification with loved ones, and compassion. The AMA (WA) welcomes the improvement in compassion, but unfortunately the McGowan Government is giving with one hand and taking away with another.

I call on the McGowan Government to immediately include spouses and partners as essential visitors, so that these people can be with their loved ones when they’re sick and unwell. Under the current arrangements, a grandmother of 80 years of age cannot visit her husband who’s having a heart attack, but she can go to a nightclub on the way home. This is bordering on bureaucratic absurdity, and we call on the Government to correct this immediately.

The current definition of essential visitors does not include first-degree relatives, spouses or partners, and this does not pass the pub test. The process to become an official visitor and get approval is also arduous, and has to be applied for every day. We call on the Government to change this arrangement so that approval as an essential visitor is for an episode of care.

Because hospitals were placed on ‘red alert’, only birth partners, a carer or guardian of a person with a disability, and people supporting patients in end-of-life situations were allowed to visit.

Well, for a short period at least. The ABC took up the story the same day, and while there were initial comments from Chief Health Officer Dr Andy Robertson suggesting the rules were reasonable, he announced late last Friday (4 March) that from Sunday, other patients could have one visitor at a time during designated visiting hours.

“While a patient may have more than one visitor during a day, visitation is limited to one visitor per two-hour visiting period,” the ABC reported.

“All visitors will be required to show proof of vaccination before visiting a hospital, with case-by-case exemptions to be considered.

“Visitors will also be required to undergo screening and risk assessment and to wear a surgical mask.”

“We expect these extenuating circumstances to be applied with common sense and compassion from the hospitals and from those managing the hospitals,” she said.

“Bearing in mind it is often an open area, and we really have to look after everyone who is in our hospitals and in our hospices.”

She acknowledged that the Chief Health Officer was reviewing the new rules.

“I expect he is looking at them as we speak and we will know when he changes them because he’ll make an announcement,” she said.

I wouldn’t claim to be solely responsible for the change; there was apparently enough of a community outcry for the chief decision-makers to see sense. No doubt, if you’d been waiting for months, even years, to come back to the State to see a loved one who happened to be in hospital, you’d be somewhat aggrieved by the denial of that right after all that time.

But it’s indicative of what the AMA (WA) represents that I took such a stand on behalf of our members. Compassion is a crucial tool for doctors, and it’s compact enough for us to carry around wherever we go. We can’t always use it; there are times when hard decisions are made quickly, and with an emphasis on efficiency.

Sometimes we then have to live with the regret of acting in a particular way, due to the constraints under which we were working. It’s one of the reasons we continually emphasise the need for a health system that includes a little slack, rather than the super-capacity doctors find themselves having to cope with most days in public hospitals.

Look, I doubt there are too many 80-year-old grandmas out there who were reflecting on how stupid it was they were happily hitting the dance floor at 2am in a nightclub, but their spouse was out of reach in a general hospital ward.

Nevertheless, you’d hope that if they did, they were pretty pleased to head out for a big one on Saturday night and hug their life partner in hospital the next day.