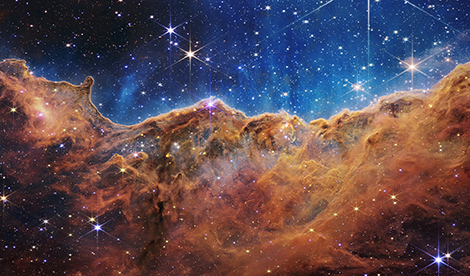 This week we got our first glimpse of the work of the not very impressively named James Webb Space Telescope. Indeed, the images this NASA telescope produced may not even have impressed you much, particularly if your understanding of the cosmos is limited to the occasional Netflix blockbuster or the meandering of Captain James T. Kirk on the USS Enterprise, like most of us. It may have looked like nothing you’d ever seen, but in a manner that you couldn’t really put your finger on.

Except the images were, in fact, rather astounding, taking us back within a short distance from the very Big Bang itself. Now, I’m not sure about you but the science behind such images tends to blow the mind, particularly if you add the mind-jarring notion of where we possibly fit into the spitting of some gases and creation of the odd gravitational forces.

The strange thing is that humans aren’t all that great with optical instruments, certainly not when it comes to things that are actually at fairly close range, or perhaps in the middle distance. Our tendency is to reject the fine detail that concentrated vision might afford us, and just see, well, what we want to see.

Unfortunately, I can’t fall into that trap, even if I’d like to at times. When you’re in a leadership position with the interests of a very large State’s health system at stake, you need to apply the telescope, the microscope, whatever scoping devices are at your disposal. In my case that includes my own work in the public and private health systems, and my own practice, as well as all the soundings from AMA (WA) councillors, government and other health providers, much of it in meetings and other briefing processes.

It’s given me an eye for the detail of COVID-19. It’s given me very sore eyes, actually, but that’s better than going in blind. The AMA (WA) supported the reopening of the State from early March, but there were always a range of caveats we suggested, particularly around the issue of hospitalisations with COVID.

Not so long ago on the space-time continuum, in an era known as mid-May, it looked like they were going to keep increasing. I suggested then that if hospitalisations rose above 300, particularly with then predicted cases of 20,000 to 25,000, the Government should look at whatever methods were needed to reduce the pressure on the health system.

That didn’t eventuate at the time, but I still thought a mask mandate would be a prudent measure, and if not, that individuals continued to use them in indoor spaces where they couldn’t socially distance.

I might have sounded like a broken record on this stuff, but time travel to the present day, and look, suddenly we’re breaking records. Unwanted ones. Hospitalisations are catapulting towards 350 cases. I’ve stated the case for an indoor mask mandate in addition to the one that applies to various health-related settings, aged care and public transport, should that number be reached.

My rationale is that any mandate would take two to three weeks to take effect. By that time we could already have 400-500 hospitalisations, the equivalent of a tertiary hospital burdened by one disease.

As I told the media this week:

We’ve already seen from the record 6,500 hours ramping in August last year and the cancellation of elective surgery in September, when we had no COVID, that even with four tertiary hospitals, we do not have the reserve to deal with business-as-usual medical care. If we effectively take out a tertiary hospital with 400 people-plus in hospital, the system is going to struggle terribly.

Adverse outcomes will occur related to COVID and non-COVID illnesses, so if someone has a car accident, a stroke, sepsis, outcomes will be compromised. We will also see even less ambulances on the road, as has already been seen in the eastern states. July is on track to break 7,000 hours of ramping – which would be the worst month in recorded history.

As the James Webb Space Telescope demonstrates, it might take its own sweet time but eventually reality hits us. At some point, if you have your eyes open, you see the light. Let’s hope the Government does.

What looks much like craggy mountains on a moonlit evening is actually the edge of a nearby, young, star-forming region NGC 3324 in the Carina Nebula. Captured in infrared light by the Near-Infrared Camera (NIRCam) on NASA’s James Webb Space Telescope, this image reveals previously obscured areas of star birth.