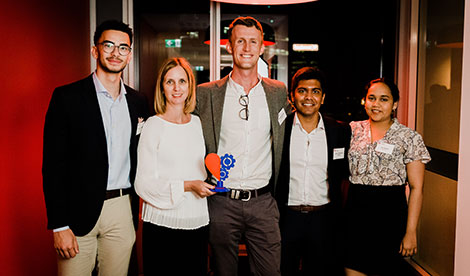 A medical device start-up established at the Harry Perkins Institute of Medical Research, is aiming to help patients undergoing one of the most common medical procedures.

Cannulas can be difficult to place successfully in certain patient groups, in particular obese patients, with some patients requiring up to five or more attempts.

While ultrasound can be used to assist cannulation, other applications such as pregnancy scans and cardiac imaging have higher priority.

Perkins Vascular Engineering Researcher Nik Bappoo said that the start-up, called VeinTech, was founded from the development of a simple imaging technology to assist clinicians with this issue.

“The overall cost to the healthcare system is much greater than the wasted hardware and includes clinician time and increased complications,” Mr Bappoo said.

“Lifesaving tests and treatment can be drastically delayed and infection rates increase with each cannula attempt. Multiple attempts also cause significant pain and anxiety to the patient.

Mr Bappoo who led the development of the technology known as the VeinWave, said in just six months, the team had identified a largely unmet clinical need and developed a solution to address the need through the Perth Biodesign program, derived from Stanford University.

The technology was awarded the first prize at the 2019 Perth Biodesign Final Presentations.