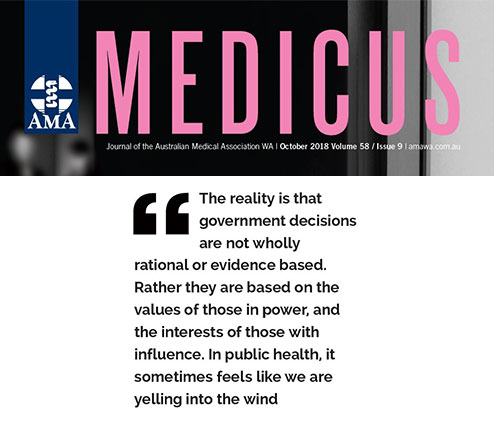 I was fortunate to attend the recent Australian Public Health Conference in Cairns, which brought together public health professionals from a range of disciplines to discuss research, challenges and opportunities in issues such as Indigenous health, climate change, alcohol, gambling, tobacco, breastfeeding and sugary drinks.

The theme of the conference was leadership in public health.

In his speech, Mr Greenland reflected on his experience in public health and outlined his recommendations to ameliorate the fundamental flaws in the way governments address public health.

He described public health as a combination of scholarship, advocacy and leadership. The ‘scholarship’ element is straightforward. Advocacy, however, is a complex task requiring a blend of skills and an abundance of patience.

Mr Greenland added that “thick skin and a sense of humour are an optional extra”. He referenced Professor Simon Chapman’s paper 10 pieces of advice to early career researchers or advocates (2015), of which number 10 is “develop a rhinoceros hide”. I’m certain this would resonate with any AMA President, politician or public figure.

The media is a strange beast with considerable power. Adding social media and ‘clicktivism’ to this equation means that opportunities to be chewed up and spit out are greater than ever.

After writing an opinion piece on e-cigarettes, which was published on a rather modest website, I was taken aback at the barrage of tweets from vaping advocates – many of which consisted of personal attacks and vitriolic abuse.

After a short reprieve from Twitter, I was comforted by words of support from my public health colleagues, and many anecdotes which were considerably worse than mine. Clearly, I am a way off rhinoceros-level thick skin.

The glaring question to those of us working in public health is: we know what the evidence says, so why don’t we see the changes we know will work being implemented? And on that note, why are the bizarre ideas of those who don’t know what they’re talking about being given oxygen, money and air-time? (Read: Inquiry into Personal Choice and Community Safety).

The reality is that government decisions are not wholly rational or evidence based. Rather they are based on the values of those in power, and the interests of those with influence. In public health, it sometimes feels like we are yelling into the wind.

We have seen industry become “legitimate” and their influence and ties with governments become cemented. No more so than for addictive, harmful industries such as junk food, alcohol, tobacco and gambling. These are all highly regulated industries, which spend tremendous amounts of time and money lobbying governments.

A new Grattan Institute report Who’s in the room? Access and influence in Australian politics highlights how “well-resourced interests – such as big business, unions and not-for-profits – use money, resources and relationships to influence policy to serve their interests, at times at the expense of the public interest”.

A recent Guardian article exposed the lobbying efforts of Philip Morris, mounting pressure on Federal ministers to legalise vaping. No doubt this had a role in the Federal Minister for Health, the Hon. Greg Hunt’s announcement of an independent inquiry into the health impacts of nicotine e-cigarettes, less than a year after declaring that the legalisation of e-cigarettes would not happen on his watch.(See page 17)

Industry has also been hugely successful in its ability to influence the available evidence about its products and how the public understands that evidence.
Leadership is critical to achieving change in public health, whether we are leading from the front (remembering that if nobody is following you, you’re just taking a walk) or leading by example. Backing and growing other leaders is a form of leadership in itself.

Over time, we have become better at recognising potential in those who perhaps do not fit the bill of a traditional leader. However, I believe we can do more to challenge our assumptions about who would make a good leader.

Given how contentious and politically charged many problems in health can be, the only way forward seems to be with an incremental approach. Patience is key, but so is a degree of impatience.

The policy process is never-ending, and we need to be as agile as those in opposition.

As medical professionals, we have credibility and legitimacy – it is our responsibility to lend our voices in support to worthy causes and the struggles of others.

Swimming against the tide is exhausting, so we need to bring people with us. When the voice speaking for patients, the profession and the health of our community is united, we are stronger in the face of resistance.