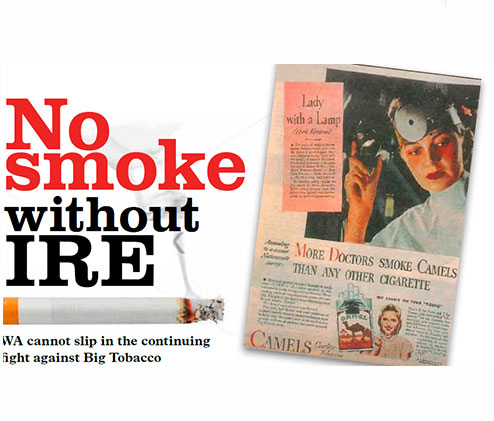 For years the Australian Medical Association (WA) has played a leading role in making smoking history.

The AMA (WA) has written, pushed, argued and campaigned for a range of steps over the last three decades aimed to phase out smoking as a tolerable, acceptable or even fashionable practice.

These years of lobbying a variety of governments, politicians, bureaucrats on ways to end smoking as an acceptable practice have been enormously successful and have undoubtedly improved the health and saved the lives of thousands of West Australians.

doctors were quite happy to see tobacco companies use their public standing to sell the products.

Of course it sometimes seems that the fight, especially in the battlefield of public opinion was a case of two steps forward, one back. The latest success in that battle was the decision by the High Court on tobacco plain packaging, to be introduced on 1 December 2012.

But like many public health campaigns, the tobacco industry was not immediately accepting of the changed environment and has begun fighting the decision on a range of grounds – including trade and intellectual property rights.

It is also interesting to see how many tobacco products use menthol in them. Experts in the field believe this is because menthol makes the smoke smoother, and therefore, presumably, more palatable. This is more attractive to a variety of markets – especially kids – they start with the smoother product, get hooked, then stay with it or move on to other brands.

Experts in the field believe strongly that this this is therefore a “gateway” product, which must be examined closely for its use and addictive qualities.

Also worrying in this seemingly endless “two steps forward, one back” game is the lack of leadership on the tobacco issue from the State Government. For example, the WA Tobacco Products Control Act 2006 required that a review of the manner in which the Act was operating and its effectiveness be conducted within five years.

This was completed by the Health Department last year and its findings released by way of a discussion paper. Encouragingly, this review raised a number of options which would “further protect the WA community from tobacco-related harm”.

The 15 options raised in the discussion paper included:

While the report was generally positive about the impact of tobacco laws and regulations in WA in cutting smoking rates, there remained, the discussion paper said, much to be done.

“These programs have been successful in driving down smoking rates. Despite this progress, smoking rates in Australia are still too high, causing needless suffering and thousands of preventable deaths each year,” the report said.

“It would be a mistake to become complacent,” the report said, and detailed that approximately 15,000 people still die in Australia from tobacco related disease and kills more than 1200 in WA every year.

Earlier this month, more than a year after the Discussion Report was released; the Final Report was tabled in Parliament – without a word from the Minister Kim Hames. The final report says little new – but does show that of those parties and individuals who responded to the original discussion paper, more than half agreed with each of the recommendations on strengthening the act.

However faced with this degree of support for the recommended reforms, the Health Minster chose to do nothing and has said nothing about the issue.

WA, in the past, has received the top awards for cutting smoking. Unfortunately WA has failed in this instance and is fast being passed by the other states.

The report, of course, is also more than a year old. During that time we have had plain packaging, which has led tobacco companies to develop new forms of promotion, requiring further action at the state and federal level.

In the meantime, we are faced with strong evidence that the WA public is on the side of taking firm action. The latest West Australian Newspaper/HBF Health Survey found that 56 per cent believe taxes on cigarettes should be increased – up from 52 per cent in 2011; 54 per cent agreed with the Federal Government’s action on plain packaging – up from 54 per cent in 2011 and 37 per cent think said they believe the sale of cigarettes should be banned – unchanged since 2011.

The Minister needs to take the lead on this issue – he can be confident that the public of WA want further action. He can also be assured that public health organisations will not allow him to forget the need for action.