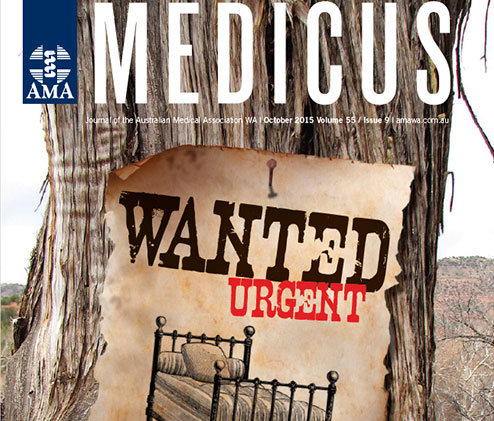 It’s a three-letter word that is possibly the most commonly used in modern medicine. The word is ‘bed’ and it is a mainstay of any discussion about medicine especially hospital care.

Whether it’s a medical professional’s ‘bedside manner’ or the structure on which a patient is placed on, the word ‘bed’ has come to be used in many situations and carries a range of meanings and impacts.

And like many things in Australian life, the medical term ‘bed’ has clearly changed in recent years. In the same way that the Australian Bureau of Statistics has gradually changed the definition of the word ‘employment’ to give the appearance that more Australians have a job, so the WA Health Department has played around with the definition of ‘bed’ to demonstrate we have enough of them.

There are, it is clear, multiple definitions and types of beds – some of them used nationally, others used by one or two states.
It appears that a ‘bed’ is definitely not just a ‘bed’. Active beds, flex beds, bed equivalents, open beds, seasonal beds, staffed beds, swing beds, even virtual beds, the list of beds in hospital care and public health generally is a long one.

But after seeking information from the WA Health Department, the definition of a ‘physical bed’ was given as:

“The total number of beds that could be allocated by use by a hospital patient within the hospital including spaces where a bed could be installed in an emergency situation; i.e. there is sufficient space, power and other infrastructure/technical capacity to make a bed physically operational.”

So according to this definition, a bed does not have to actually exist to be counted as a bed. The important thing, this definition argues, is that just having the sufficient space, power and so forth is the key. Voilà! – a bed exists.

Importantly, the word ‘beds’ has also become a measurement of care and the extent to which our medical system is able to cope with the demand for care, both today and into the future.

And the news on beds in this context is not good for health in Western Australia.

As the major issue in this month’s Medicus strongly argues, we are currently short of a least 100 beds in WA tertiary hospitals to meet current demand – let alone future population growth or demand.

Even after Australia’s newest hospital – the $2 billion Fiona Stanley – came on line, we have fewer beds in tertiary hospitals today than there were prior to last year’s opening.

The opening of the St John of God Midland Public Hospital will add a further 114 secondary hospital level beds but these will be of insufficient character and number to address the need for tertiary beds.

The AMA (WA) has had a long-standing interest in beds over many years. During this time, we have argued, advocated and lobbied the WA State Government and the Health Department for more beds. With every new Minister, every elected government and at virtually every meeting, the AMA has pushed for the number of actual beds in our hospital system to reflect demand.

In the April 2011 edition of Medicus, Dr Cassandra Host recalled the uproar in The West Australian newspaper when a female patient was photographed lying across chairs of a well-known tertiary centre because there were no beds available.1

“I recall fond memories of treating patients in the ‘plaster room/storage area of another ED,”1 she added in the article.

Once again using the pages of Medicus, in 2012, we argued: Stresses in the system are again publically re-emerging as the effects of clinical reforms reach their limit and system capacity remains relatively static against escalating demand.

Whilst the WA Public Health system is undergoing its greatest re-capitalisation ever, despite all the investment and all the announcements to date, very little capacity has been added.

Unfortunately, these measures were not taken during the planning of the New Children’s Hospital (NCH). The proposed bed capacity for NCH was based on out-dated population projections and consequently, the NCH will be operating at capacity as soon as it opens.

The AMA (WA) continues to urge the WA Government to increase bed numbers at the NCH by adding 100 beds across an additional two floors now before construction is completed.

Of course, that plea fell on deaf ears.

In more recent months, we have heard and read of the pressure facing Emergency Departments when there are not enough beds in general hospital wards to cope with demand and hospital ramping worsens as a result.

Even the latest Health Department Annual Report 2014-15 reveals that on the day that it opens, the new Perth Children’s Hospital will be short of beds, thanks to the failure of the State Government to take the opportunity of adding up to two additional floors during the construction phase in order to future-proof it, and the growth in demand forecast to rise dramatically.

This was despite the public campaign led by the AMA (WA) and the separate letters, hundreds of them, from clinicians to the Health Minister, Dr Kim Hames arguing that the best time to add the additional floors was during construction – even if the wards were not fitted out or used immediately.

‘Bed’ might be a three letter word. In the increasingly pressured world of health in WA however, it is increasingly becoming a four letter one muttered under the breath of doctors as the very lack of them adds more pressure to an already highly pressured job.