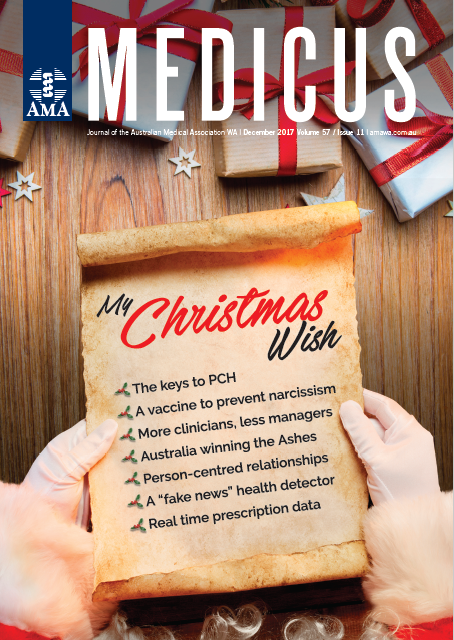 Once again, the AMA (WA) has been unrelenting in its representation of doctors, patients and the wider community in the fight for better healthcare.

It is important every now and then to slow down and consider what has just been experienced. The month of December is traditionally the chance to look back over the past year, both for the Australian Medical Association (WA) and for Medicus.

Three hundred and sixty five days of health. As always the pace has been frenetic and the degree of change has been dramatic.
But such is life, especially health, in the 21st century.

Two issues dominated the year – firstly, morale at our hospitals and the fall-out from some very worrying survey results, and secondly the continuing saga of the new Perth Children’s Hospital and a litany of problems that has delayed its planned opening by an incredible two-and-a-half years.

The theme of change was set by a State Election in March which brought about a new government and a new health minister.

The AMA (WA) played an important part in the election campaign.

For the first time, a website was established where we examined each health policy from all parties as they were released. The role of this site, wahealthfirst.com.au was later recognised with a key award by the Federal AMA at the 2017 National Conference.

As part of this push to help ensure health was not lost in the fire and fury of an election campaign, Medicus in February ran two major opinion pieces by Premier Colin Barnett and then Opposition Leader Mark McGowan putting forth their arguments on the sector which accounts for more than 25 per cent of the State Budget.

In the same pre-election issue, we also carried an interview with both the incumbent Health Minister, John Day and the Shadow Health Minister, Roger Cook where the hard questions were put to both politicians.

The AMA (WA) was also a partner of a pre-election public health forum, where a capacity audience debated the key issues in health, especially public health, in the weeks leading up to the State Election.

After the election, it fell to Medicus to be one of the first publications to interview Mr Cook soon after he was sworn in as Health Minister. Rather than giving the job to a journalist or one of our regular writers, then AMA (WA) President Dr Andrew Miller took the role of questioner and pushed Mr Cook on a number of key issues such as how the promise of medihotels would be delivered and how their construction would help solve bed shortages.

The change of State Government was followed by a change in the AMA (WA) President when due to family issues, Dr Andrew Miller retired from the presidency after one year in the role.
Dr Omar Khorshid was elected unopposed at the Annual General Meeting in May and hit the ground running.

The AMA (WA) Gala Dinner was again a highlight of the year, where retiring WA Police Commission Dr Karl O’Callaghan was awarded the President’s Award.

In a moving presentation, beloved and dedicated GP Dr Steve Wilson received the AMA (WA) Hippocrates Award for his years of contribution to family medicine, while the 2017 Junior Doctor of the Year Award was presented to Dr Sarah Newman.

We emphasised mental health, the importance of the family doctor, and continued the fight against efforts by pharmacies pushing into primary health.

With morale one of the dominant issues of 2017, the middle of the year saw the spotlight turn to Princess Margaret Hospital and its many management problems.

The Review of the morale and engagement of clinical staff at Princess Margaret Hospital was established by the Child and Adolescent Health Service as a result of a push by the AMA
(WA) and had a major impact on health.

At the AMA, there were a number of surveys of medical professionals, which dominated activity and media attention.

The AMA (WA) 2017 Clinical Engagement Survey, one of the most important ever conducted by the Association in the State highlighted the relationship between clinicians and management at local hospitals.

The overall negative results generated enormous media and political attention. Following meetings with Health Boards, however, management changes began to be made. We will be watching to ensure that this change in management style is not just fleeting but will generate permanent and positive change.

And through it all, Perth Children’s Hospital has dominated news and debate, with hardly a month passing without some disaster further delaying the opening of our newest hospital.
From non-compliant fire doors, asbestos in roof panels, unsafe levels of lead in the drinking water, even the discovery of the potentially fatal bacteria legionella in the water supply, several issues have bedevilled the $1.2 billion building.

However, the year closed with Health Minister Roger Cook  announcing that PCH was “on track” to accept its first patients in May 2018 and an opening (and therefore closing PMH)
“anticipated” on a Sunday in June next year.

But as we pointed out to the media, Mr Cook’s public comments included the not-quite-so-assured refrain that he was confident the dates were correct although he could not guarantee them.

And now with the Christmas break in sight, we have the chance of looking forward.

In 2018, we will experience the release of the Sustainable Health Review, established by the State Government to look at a blow-out in health costs.

The AMA (WA) welcomed the report and the opportunity to look closely at health costs but as Dr Khorshid said, it must not be used by the government as a razor gang as health had already been cut to the bone.

The next State Budget and the one after that may well be bad news for health. Only time will tell.

But if all goes well, 2018 will at least be the year that we can celebrate the opening, finally, of the Perth Children’s Hospital.

It’s always good to finish the year with hope!