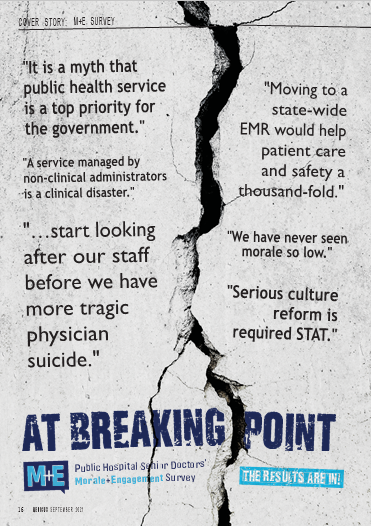 Much has changed since the Australian Medical Association (WA) last conducted its biennial senior public hospital doctor morale and engagement survey in October 2019. Events such as the introduction of voluntary assisted dying in Western Australia, the COVID-19 pandemic, a record-breaking budget surplus and a landslide victory for WA Labor have seismically impacted our State over the past two years.

Our public hospital system has also experienced significant upheaval and undeniable pressure that will have a lasting impact on staff and patients alike, and will forever be seen as an avoidable failure to protect workforce wellbeing and patient outcomes.

In just the past few months, WA has recorded the lowest available public hospital beds per capita rate in Australia, broken its unenviable ambulance ramping record a shameful six times, and more recently, placed a system- wide pause on elective surgery due to WA Health’s inability to cope with business as usual – all this in a COVID-free environment.

Holding up the health system is a battered, weary workforce, with both anecdotal and validated reports of burnout, plummeting morale and poor culture in the public sector.

The recently released third iteration of Minister Roger Cook’s ‘Your Voice in Health’ staff engagement survey highlights the dangerous faults within our public hospital system, where healthcare workers maintain confidence in their colleagues yet do not think it’s safe to speak up and challenge the status quo.

The AMA (WA)’s 2021 Morale+Engagement Survey (M+E Survey) provides yet another red flag, painting a similarly concerning picture of the state of clinician morale, engagement and the pervasive fear of raising concerns that exist in WA’s public hospital system.

More than 600 senior doctors working in the public sector responded to our questions about culture, morale and engagement, with the feedback providing significant insight into a system cracked open by crises.

A number of system-wide takeaways have emerged from the M+E survey.

The standouts and the shockers

At a hospital level, of those hospitals reported, there are some clear stand-out performers in WA’s public health system.

It will be unsurprising to many that privately-operated public hospitals, SJG Midland and Joondalup Health Campus (JHC), perform comparatively better than other public hospitals in the majority of the questions.

However, among the positives, there are some results that indicate site-specific concerns.

A large majority of senior doctors at both these hospitals highlighted the fact that decisions made by senior executive were not reasoned and influenced by clinical engagement, and that hospital support for the clinical workforce was ‘poor’ or ‘very poor’.

Furthermore, RGH was the only reported hospital where more than 50 per cent of senior doctors feared victimisation as a result of raising concerns about senior executive decisions.

No doctor should fear victimisation but a majority of senior doctors holding such a concern requires immediate board, if not, ministerial intervention.

At the epicentre of job satisfaction, morale describes the overall outlook and confidence that employees feel at work.

JHC and RPH have overwhelming majorities in this space, with respondents from these hospitals rating senior doctor morale as either ‘fair’, ‘good’ or ‘excellent’.

At the reported HSP level, concerningly a majority of senior doctors at four of the five HSPs rate morale as being either ‘poor’ or ‘very poor’. WACHS has the poorest ratings when  it comes to senior doctor morale.

Unsurprisingly, given recent tragic events, and the bureaucracy’s initial response to these events, the senior doctor morale rating at the Child and Adolescent Health Service (CAHS) has declined significantly since the 2019 AMA (WA) M+E Survey.

While the East Metropolitan Health Service (EMHS) may lead the WA Health HSPs, with only 40 per cent of senior doctors reporting morale as ‘poor’ or ‘very poor’, these results are still nothing to celebrate and represent a dangerous indictment on how WA Health is managing employee wellbeing in our public hospitals.

Of greatest concern to the AMA (WA) are the morale ratings at RGH and KEMH, two hospitals where morale and clinical engagement are clearly issues.

87% of senior doctors at RGH rate morale as either ‘poor’ or ‘very poor’.

82% of senior doctors at KEMH rate morale as either ‘poor’ or ‘very poor’.

These figures eclipse the horrendously poor morale ratings identified by the AMA (WA) at Bunbury Regional Hospital (BRH) in April 2021 (senior doctors and DiTs), which sparked the recent WorkSafe investigation at the site.

They also exceed those reported at CAHS in the 2017 M+E Survey, which followed the damning review of the morale and engagement of clinical staff at Princess Margaret Hospital.

That review called for an immediate change in leadership style, a rigorous action plan to address issues, and a strategy for devolution of accountability and decision-making to head of department (HoD) level, including development and training opportunities as required, among others.

While these were all recommendations that related to PMH at that point in time, and therefore are not necessarily what is required at RGH or KEMH, it is clear that there are significant issues that need to be addressed as a matter of priority, given the risk to wellbeing and safety of both staff and patients at these hospitals

In terms of how hospital ‘culture’ has been reported by senior doctors, JHC, RPH and SJG Midland top the list.

At the other end, RGH, KEMH and Armadale Kelmscott Memorial Hospital (AKMH) all have a majority of senior doctors describing culture as either ‘poor’ or ‘very poor’.

84% of senior doctors at RGH reported culture as ‘poor’ or ‘very poor’ – a figure that stands in stark contrast to the other hospitals reported.

At a WA Health HSP level, a majority of senior doctors at South Metropolitan Health Service (SMHS) and WACHS report culture as being ‘poor’ or ‘very poor’ at their hospital.

While 46 per cent and 47 per cent of senior doctors at NMHS and CAHS respectively, identify culture as ‘very poor’ and ‘poor’, 72 per cent of EMHS doctors reported culture to be ‘fair’, ‘good’ or ‘excellent’ at their hospital