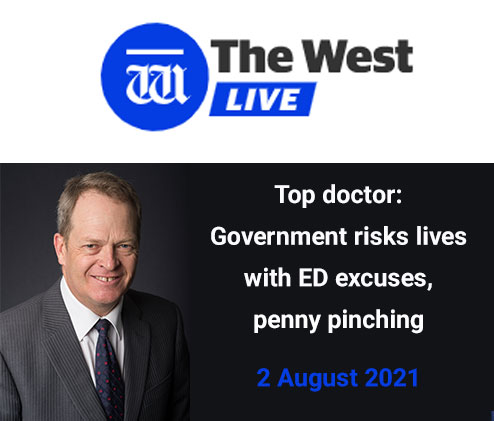 Yesterday morning, AMA (WA) President Dr Mark Duncan-Smith was a guest of West Live with Ben O’Shea. In a wide-ranging interview with Ben O’Shea, Dr Duncan-Smith took apart the Government’s many shifting rationales for the near-catastrophic conditions in our public hospital emergency departments, as well as why we should not follow New South Wales’s lead should another COVID-19 outbreak hit our State. View the interview transcript below:

Ben O’Shea,  The West Live (BOS): Now we’ve talked a lot about the crisis in our health system and today we got another reminder. New government numbers revealed less than half of the patients who rocked up to Royal Perth Hospital’s emergency department in June, were treated within four hours. That’s a shocking stat, but it’s not much different from the situation at our other adult hospitals. Joining me now is the WA President of the Australian Medical Association Dr Mark Duncan-Smith. Good morning, doctor.

BOS: So can you explain to us what this four-hour rule is in hospital EDs are,  and why it exists?

MDS: Well, basically it’s fair to try and make things more efficient to set a benchmark.  So patients are basically being dealt with, and preferably out of the emergency department, within four hours.

BOS: Yeah, that makes sense, I guess, so you can keep track of what is actually happening and have a measurement for that. And now, as I mentioned, 49 per cent of emergency patients at RPH were seen within four hours. The majority were not. 53 per cent of patients at St John’s weren’t treated within four hours, 57 per cent at the Joondalup Health Campus. Now those numbers don’t sound all that good. What’s your assessment?

MDS:  Look, it’s totally unacceptable. Basically, this is another measurement of a lack of capacity within the system, and we’ve got to look at the reason behind this. Basically, Treasury or the Treasurer controls health delivery through financial ability to give money. The system has only had a 1 per cent increase for the last three or four years, despite a three to four per cent increase in activity. This is measurable. This is predictable. We’ve been talking about this. Ramping is at nearly 6,000 hours a month and that’s ambulance ramping, Ben.

That’s not actually patient ramping. They offload. A lot of the ambulances carry two stretchers now, so they offload a patient onto the ramp, the patient stays on the ramp, but the ambulance leaves. So, the actual 5,000-6,000 hours is only the ambulance ramping and this is all due to not enough capacity within the system.

BOS: While we’re talking about that four-hour rule, the Government’s benchmark, its own benchmark is 90 per cent. And clearly, RPH tracking at 49 per cent is nowhere near, it’s not even in the ballpark. How could it be possible that there’s such a huge difference?

MDS:  Look, the problem is that it’s about the capacity within the hospital. If the hospital is completely full then there’s nowhere to get these patients out of the emergency to. So again, a very efficient hospital is one that runs between about 80 and 85 per cent full or occupancy, whereas a lot of our hospitals are running at over 100 per cent occupancy. Now it’s pretty simple. Hospital’s full, patients get seen in the ED and can’t get out, therefore you’re breaking your four-hour rule and that’s why these figures are so low. But even if we go a little bit further, emergency departments are full, patients are on the ramps. It’s not rocket science, so I really think the Treasurer needs to open up the chequebook.

This isn’t about someone in their ivory tower just counting our taxpayers’ money. This is about caring and taking care of people so that they don’t have adverse outcomes and don’t die.

BOS:  Yeah, well, let’s talk about some of the explanations, you might call them excuses, that the Government has provided for all of this. And they’ve said one of the problems is the beds being taken up by National Disability Insurance Scheme patients who are unable to be discharged from hospitals because of COVID-19 restrictions. Is that accurate?

So that excuse put forward by the Treasury is not even part of ramping.

BOS:  A spokesman for Roger Cook, the Health Minister says that, you know, another part of this issue is that 20 per cent of the people presenting to EDs should be treated by their GP instead. Do you buy that?

MDS:  Well no, I don’t buy that; again, nothing new. That’s typical of emergency departments over the last five or 10 years. So, I agree with the concept that we should try to get those patients into General Practice, but that’s again not the cause of ramping. This is just what I call bewildering statements that just come from anywhere to give an excuse when the actual fundamental reason for this is quite simply a lack of money, a lack of funding, a lack of resourcing and it leads to reduced quality and safety and reduced access for our citizens of WA.

BOS:  What about mental health? They also say, you know, we’re seeing a lot of people presenting with mental health issues and that’s clogging up the system.

MDS:  Well again, our current Health Minister was also the Minister for Mental Health, for the last four years, so you know, we don’t have to look far to see who’s been in charge of that. Now yes, roughly 10 per cent of presentations are due to recurring mental health presentations, and that’s something that needs to be looked at as well.

BOS:  And what about the idea that, you know, this is happening in hospitals around the country and so, you know, people in WA should just accept that’s how it is.

MDS:  No, that’s not the case either. The increase in activity has been steady over the last three to four years with a 3-4 per cent increase in activity per year. That has also been occurring interstate and yes, there are some states that have bad ramping as well. But we are one of the worst, and interestingly, we also have the least number of hospital beds per capita of any state in the whole of Australia.

And we also have that on the background of a $5,000 million budget surplus. You look at the two figures and compare and contrast. And then again, this is all about the Treasurer sitting in his ivory tower counting our taxpayers’ money while the people of WA suffer and die.

BOS:  Well, we’ve got this money, we’ve got this $5 billion surplus as you say. But how do you spend it? What’s the AMA’s recommendation for, you know, opening the chequebook and then what happens?

MDS:  Well, we’ve suggested that the operational budget for WA Health needs to increase by $500 million a year over the next three to four years, just purely as a catch-up. And then where that needs to be spent is on staff, on beds to increase the capacity of the hospitals to get the occupancy down to that roughly 85 per cent mark. That will lead to reduced ramping, emergency departments being more compliant with the four-hour rule and basically help to fix the system.

BOS: Well, let’s change tack now. We spoke last week quite a lot in the media about vaccination rates amongst health professionals. It was sitting around about 60 per cent across WA. How can we get that higher?

MDS:  Look, there is an ongoing program within hospitals.

Uhm, I think that the word I’m actually getting from the hospitals is that the actual vaccination rates certainly for doctors is in the 80 per cent mark and then some of the more high-acuity units even as high as 90 per cent. But look the way we get it higher is by ongoing education. Getting people to understand that vaccination is the only true way out of this pandemic. It’s the only way to get back to normal life. Healthcare workers need to be vaccinated. I’m fully vaccinated. I encourage everyone to get vaccinated and we just need to move forward and get on with things.

BOS:  The PM is pleading with people to be inspired by our Olympic athletes, who pretty much all are completely vaccinated. Do you think that might help the mindset of some people who are still a bit hesitant?

We need to educate people, get them motivated, and I encourage every listener when you get eligible for vaccination, don’t hesitate, just go and get it. It’s the way out of this pandemic, it’s the way to keep you and your loved ones safe.

BOS:  Well, I’ve just got the numbers in from New South Wales – their COVID cases. I might just run through them now while I’ve got you on the phone if that’s okay, doctor. And so, New South Wales Health has recorded 207 new locally acquired cases of COVID-19 in the past 24 hours to 8pm last night. Fifty-one of those cases were infectious in the community and the isolation status of a further 46 remains under investigation, so you’d have to think that a proportion of those were out in the community as well. There are currently 232 COVID-19 cases in hospital in New South Wales – 54 of them are in intensive care, 25 of those are on ventilators right now. What do you think when you hear all of that?

MDS:  Well, I think it’s absolutely tragic. Unfortunately, NSW through their leadership of being in a ‘mock down’ for really a couple of weeks now. My understanding of where they’re going with their restrictions is they’re only now just moving towards what we would call in WA a lockdown and I’m not surprised. I look at these figures, and I see that, you know 50 or 60 people, are still in the community. Well, this is what I mean. This is really a mock down. It’s not a lockdown. They need to get their act together, have a proper lock down and start to get control of this virus. The excuse that they’ve given is basically trying to ensure that the economy stays good and with businesses staying open, but what our leaders need to understand is if you don’t control COVID, you don’t have an economy.

And so, they’ve got to move forward with a proper lockdown and try to get control of this. And this should be a salient reminder to West Australians, that we have done a great job; we’ve had great leadership with the Premier with the lockdowns when appropriate, controlling the borders. I would certainly encourage all West Australians if we do have to go back into lockdown to observe the rules of lockdown because they’re not being observed in New South Wales.

I saw pictures over the weekend of Manly beach that looked like Cottesloe beach on a normal day to me, so they just need to move forward to a proper lockdown and get control of this virus.

BOS: Yeah, ’cause it’ll only get worse if they don’t.  WA president of the Australian Medical Association Dr Mark Duncan-Smith, thanks again for sharing your insights on the West Live. We appreciate your time.

LISTEN TO PODCAST AT THE WEST LIVE