Australian Medical Association (WA) President Dr Andrew Miller is requesting an apology and clarification after defamatory comments about him were posted to Facebook from an account attributed to Senior Health Department Policy Advisor Mandy Morgan-Lewis, following the airing of Flashpoint on Channel 7 last night. 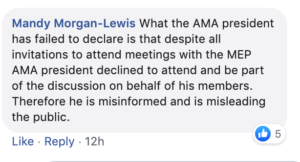 The AMA (WA) has in fact been highly engaged in these discussions with government at all stages, including during the Joint Select Committee (JSC) and Ministerial Expert Panel (MEP) process, both via Dr Miller and his predecessor before July 2019, Dr Omar Khorshid and their various professional AMA (WA) policy advisors.

VAD has also been discussed in detail at monthly meetings with the Health Minister Roger Cook, a sponsor of the Bill, and various members of the MEP including the Chairman, who has also met office holders and staff of the AMA (WA) in person.

Dr Miller, an anaesthetist who is legally qualified, said that it is important that all those interested stick to the issues rather than playing the man. That someone on the government team implementing VAD laws would apparently try to discredit him at this important stage of community discussion was concerning.

“I went along to Flashpoint in good-will to engage in discussion around how the VAD Bill would work if it became law, how palliative care can help when properly resourced, and what amendments are needed from a doctor perspective to make it work. I got some rigorous questioning which I deserve and appreciate. Have a crack at my ideas or those of doctors by all means, but don’t make up stuff about me,” Dr Miller said.

“The AMA (WA) is serious about helping the community, to the degree that we surveyed and received 1,300 responses from WA doctors – it is the only current survey of doctors on this VAD Bill. I was there to detail this evidence of doctor concerns, which are huge, and to be attacked by a Health Department insider in this way is disappointing because people might think she knows what she is talking about given her special role.”

It is even worse that a policy advisor would make such a statement when the Final Report of the JSC notes that “the committee maintained a lengthy dialogue with the AMA (WA) from the commencement of the inquiry…”. Also noted in the Final Report is the AMA (WA)’s view that any legislation introducing assisted dying in WA should be developed in consultation with the medical profession.

“I have a cordial relationship with the Chairman of the MEP Mr Malcolm McCusker, with whom I have recently exchanged emails to better inform our mutual understanding of the issues, and the AMA (WA) has, at my instigation, published articles from MEP members to explain their perspective to doctors in WA.

“There has been and there is no lack of willingness or action on being invited, attending and discussing, from me, my predecessor, or the AMA (WA), and I would appreciate an apology from Ms Morgan-Lewis for her comments suggesting otherwise,” Dr Miller said.

How the AMA (WA) has engaged with the State Government, doctors and the broader community on VAD

The AMA (WA) met on a number of occasions with various members of the Ministerial Expert Panel and provided an extensive formal written submission, which recommended a number of ‘safeguards’ that at present do not feature in the WA Bill, and are the subject of our current advocacy.

The AMA (WA) has also engaged directly with many Members of Parliament on the issue and wrote to Premier Mark McGowan on 22 May 2019, asking him to reconsider legislative timeframes and implement a more considered and informed consultation process on the draft legislation, which was not released to the AMA (WA) before being tabled in Parliament a few weeks ago.

Following the introduction of the draft legislation, the AMA (WA) has made a number of public comments and devoted an entire edition of our monthly journal, Medicus to the VAD Bill that is currently before the WA Parliament. The August edition of Medicus, titled Is it safe? Workable? Your Views, extensively outlines the AMA (WA)’s concerns and carries a number of opinion pieces from doctors with a range of views on VAD, including MEP members.

All Members of Parliament have been provided that edition of Medicus, so they could read AMA (WA) President Dr Andrew Miller’s column, Standing in the Middle Ground, and also his invitation to provide feedback directly to him via his personal email, Twitter account (@drajm) and phone number.

The AMA (WA) continues to seek feedback on the VAD Bill from all WA doctors, who are speaking out in unprecedented numbers about their concerns, and remains open to engaging with Members of Parliament on the Bill, irrespective of their position on VAD.